Bobby ‘pleased’ with the points 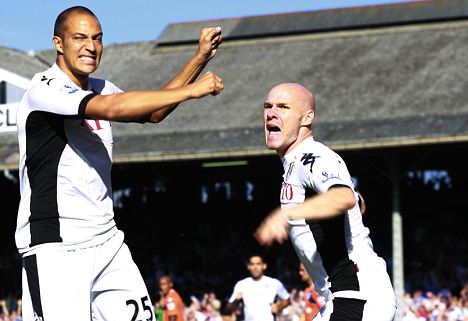 A beaming Bobby Zamora was pleased by both the manner of Fulham’s win over Wisla Krakow this evening and the continued success of his partnership with Andy Johnson up front.

The victory leaves Fulham needing just three points from their final two games in Group K to qualify for the knockout stages of the Europa League and both strikers looked in fine fettle tonight.

We were pleased to win, obviously. And it was a good performance with a few goals, which is always nice.

There were some well worked goals, so we were pleased with that. And AJ’s on fire – he’s the man at the minute, and long may it continue for him and for us. After a year out injured he’s come back and he’s strong. He’s proving a point to a lot of people who doubted him.

Zamora revealed that the free-kick routine that led to the third goal wasn’t exactly well-rehearsed.

We tried it for the first time the other day. We’ve literally done it once in training! It worked brilliantly, so don’t go telling everyone, or you’ll expose it!

The England admitted that losing in Krakow was a real disappointment for the squad.

Yeah, we were a bit disappointed with that. So the lads were really up for it tonight. We knew we had to win this one and prove a point to them, so it was nice to win, but now we have to think about a tough game on Sunday [against Tottenham].

To be fair, in the past couple of seasons we’ve put in some good performances against them, so it would be nice to do the same and win, but it’s going to be tough. They’re a great side with some top players, so it won’t be easy.

But we’re at home, which is massive. We’ve got a great record here, so hopefully we’ll put in a good performance again and get a good result.