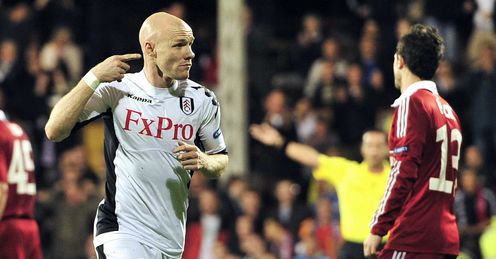 Andy Johnson just can’t stop scoring in Europe. The Fulham striker, still banging in the goals as his contract negotiations with the club continue, rates his first goal in the 4-1 romp past Wisla Krakow as one of the best strikes of his career.

The 30 year-old says Fulham were delighted to win so convincingly at Craven Cottage last night – with the victory avenging the earlier defeat in Krakow and getting Fulham’s qualifying bid back on track.

We were happy to get the three points to give us a great chance of qualifying. We’ve got two big games coming up against Odense and FC Twente, so if we can get another win, I’m sure we can progress. I’m pleased [with my own performance], but the main thing is that the team got the win we needed because we were quite disappointed to lose at their place the other week.

The first goal was a great ball from Danny Murphy and it was probably as clean a strike as I’ve hit in my career. It was a little bit behind me, but I hit it and it always looks nice when it hits the post and goes in. It’s probably up there in my top two goals, but the main thing is that we got the three points and we just need to kick on now.

The second was a well worked free-kick that we’d been practicing and I was delighted to get it over the goalkeeper.

Johnson is pleased that with two games left – against Odense and group leaders FC Twente – Fulham’s fate is squarely in their own hands.

I don’t think anyone likes going into games waiting on other results. You want the incentive of it being in your own hands. Now it’s up to us.

It’s a massive competition. We got to the Final a couple of years ago. Everyone in and around Fulham knows how important it is to the Club and it’s up to us to do well so I’m delighted to keep scoring and hopefully I can carry it on this Sunday.

It was a great game and a great atmosphere. The Fulham fans were top class like they always are, week-in, week-out and they played their part.

Johnson dismissed any worries that Fulham will be jaded after their European exploits when they face Tottenham, played a largely second string side in Russia last night, in Sunday’s London derby.

We have great medical staff around us and we have a great recovery squad and a great system at the Club. Tottenham have played as well although I’m sure they rested a few more than we did, but we’re professional footballers and we’ll all be ready for Sunday. We’re all fit lads so we can’t use mid-week games as an excuse.

Week-in week-out we play in the Premier League and ultimately we want to stay and do well in it so that’s always the main priority. The Europa League is a bonus, but we got to the Final two years ago so I don’t see why we can’t do it again.

It’s been a great week for the guys. We got our first away win which was important and the three points in the Premier League bumped us up the table and relieved a bit of pressure, especially after the unfortunate loss we had last week against Everton. But we bounced back well. We played well last Saturday. We were a little bit lucky but we got the three points and it’s taken us to a big game tonight and the boys stepped up again. And I’m sure they’ll step up again on Sunday.