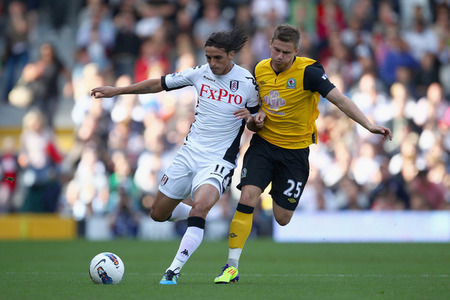 In an interview with a Dutch football website, Bryan Ruiz has said he’ll need a little more time to shine in the Premier League.

The Costa Rican winger has endured a tough start to life in England following a £10.6m move from FC Twente on transfer deadline day. He was hauled off at half-time after an uncomfortable debut against Blackburn and missed a good chance to give Fulham a rare away win at West Brom, but impressed playing in a slightly deeper role before missing the crucial spot-kick as the Whites went out of the Carling Cup on penalties at Chelsea.

He feels he had slightly longer on the ball in Holland, giving him an extra second to assess his options, and admits he’s been surprised by just how aggressive the English game is. Opponents have frequently doubled up on Ruiz and denied him the freedom he used to enjoy with Twente. He finds himself often faced by two opponents, where there were more one-on-one contests in the Eredivisie. He’s still determined to prove his worth to the Craven Cottage faithful but has asked for more time to integrate into the side.