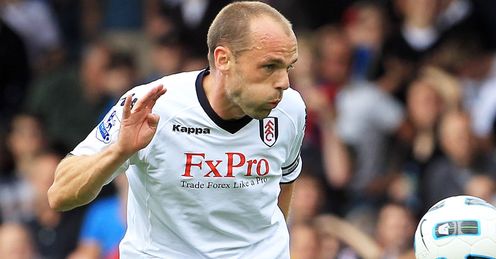 One of Martin Jol’s first tasks on taking the Fulham job was reshaping an ageing squad. Roy Hodgson had banked on experience ever since he embarked on what seemed like a doomed rescue mission at Christmas in 2007 and stayed true to the same policy as he sought reinforcements as his resources were stretched by such a memorable European run. Jol had stated his intention was to sign younger, talented players but he has – for the most part – stuck with the tried and tested personnel in the league.

Jol has earmarked Marcel Gecov, who had a decent debut in the League Cup at Chelsea, as the long-term successor to Danny Murphy at the heart of the Fulham midfield. Some Fulham fans thought Lawrie Sanchez had signed a busted flush when he turned to Murphy, struggling to get a game at the end of the summer transfer window, but the skipper’s been one of the club’s most consistent performers and – like Aaron Hughes and Chris Baird – shows that Sanchez had a decent eye for a player. Still, there’s been plenty of talk that Murphy, now 34, might be fast approaching the end of his career at the top level, with his legs simply unable to deliver the sort of all-action performances that were once his trademark.

But Murphy’s influence has always been greater that the simple sum of the ground he covers. He is a reassuring and organisational presence in a Fulham midfield that is often overrun without him. Now playing in a much deeper role than he did during that long spell with Liverpool, Murphy’s defensive qualities are often overlooked. He frequently provides a shield for Fulham’s defence and, now playing in a midfield that is often without the physicality of Dickson Etuhu, the success of his tackling can’t be overlooked. The skipper has made 22 tackles this season, second in number only to Steve Sidwell, and has won more than 81% of them. He has also interception 14 opposition passes.

Murphy’s passing remains his best asset. The stats underscore this point. He’s completed 600 passes already this season and has a success rate of 81.8%. Even deployed in a much more defensive role, he can still start attacks and create chances. Only David Silva, who must be an early candidate for Player of the Year, has created more goal chances for his side than Murphy – whose superb raking pass unlocked a surprised Wigan defence yesterday afternoon. Indeed, his part in the opening goal at the DW Stadium underscored just how vital he remains to this Fulham team. With his side under the cosh after a prolonged period of Wigan pressure, Murphy received the ball from Brede Hangeland and released Bobby Zamora with a perfect crossfield pass. He repeated the trick with a lovely lofted ball for Zamora in the second half, that almost delivered another goal.

As his chalkboard shows, Murphy’s forward passes were largely successful and he hardly wasted a ball:

While the concern about who replaces the captain is valid, it’s far too soon to think about pensioning him off. Murphy’s clever use of the ball engineered our best chances against Wigan and created the openings for a crucial win. He was close to scoring against Everton and was a critical part of our comeback against Manchester City earlier in the season. He was badly missed during his spell on the sidelines with a knee injury and if Jol is to persist with his favoured 4-2-3-1 formation, it’s clear that Murphy should be the linchpin of the midfield. After all, it seems he’s the one who makes us tick.