Riise ready to return for Norway? 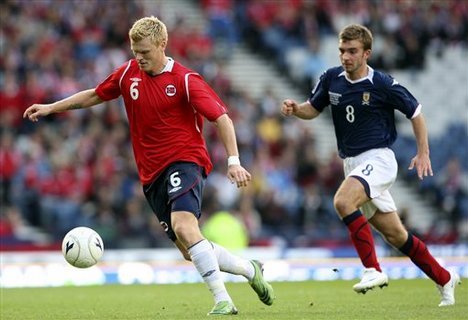 John Arne Riise is confident that he will be fit enough to return to action for Norway in their crucial Euro 2012 qualifier against Denmark on Tuesday night, only twelve days after suffering what Martin Jol described as a ‘serious’ knee injury.

The Fulham left back was expected to be out for some considerable time after limping out of the club’s Europa League play-off round second leg defeat in Dnipro and Fulham were so concerned that Norway remained keen to use the former Liverpool defender in their Euro 2012 fixtures that the club sent one of their doctors to assess him. Riise was duly left out of the Norway side that scraped past Iceland on Friday night – a decision that was described by the Norwegian team doctor as ‘absolutely correct’ but believes he will return to the starting line-up for Tuesday’s trip to in Copenhagen.

The match is vital to Norway’s chances of reaching their first major finals since 1998 as Egil Olsen’s side are level on points with Portugal at the top of a tight Group H. The Norwegians could book a play-off place with a win at the Parken Stadium and Riise is desperate to play his part. He told Norwegian television that he felt comfortable after coming through a strenuous practice session on Saturday:

I completed training today. It felt good. There are two days of training left before the game and much can happen but it looks good. I begin to feel a tingling in my stomach. I imagine that I will play but we will know for sure after the weekend.

Provided he comes through the rest of his international duty unscathed, Riise’s early return will be a boost to Fulham who will be looking to improve on their disappointing early-season form when they resume their league campaign at home to Blackburn on Sunday.