Malbranque calls it a day 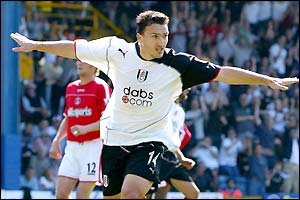 Some sad news from France. A troubled Steed Malbranque has reportedly retired from football only a matter of weeks after signing for St Etienne.

Malbranque, who was always close to his father, made just one appearance for St. Etienne and was released his contract earlier this week. Coach Christophe Galtier admitted that he was ‘worried about him’. The surprise news completes a career that rather fizzled out after Malbranque fell out with Chris Coleman and left Fulham in 2006. He never really held down a regular place at Spurs and was largely used as a substitute towards the end of his time at Sunderland, for whom he scored just two goals in three years.

The Belgian-born midfielder remains one of my most favourite players and was a star of the Jean Tigana era at the Cottage. Bought in as a bright young French talent, Malbranque’s silky running, brilliant vision and an eye for goal were the main reasons why the Whites kept their heads above water in our early years in the Premier League. Malbranque shone immediately in an impressive debut as Tigana’s side came close to shocking Manchester United in our opening Premier League fixture at Old Trafford, giving Jaap Stam a torrid time in a 3-2 defeat, and finished his first season in England with ten goals to his name.

He scored Fulham’s first goal in the UEFA Cup proper which earned a fine win at Hajduk Split and there are so many fine memories to pick out from his time at Craven Cottage. He scored an FA Cup hat-trick against Charlton that season as well as a fine strike at Arsenal as Fulham threatened to record a long overdue win at Highbury. Perhaps the best of his goals came in the humbling of Manchester United at Old Trafford in November 2003 – and it was a testament to the strength of the French midfield at this time that his strong shows didn’t earn him more than one call-up to the international squad. Malbranque made 211 appearances for Fulham, scoring 44 goals, and remarkably still sits in tenth place on the all-time Premier League assists’ list with 54.

Have a look back at some of Steed’s best moments for Fulham here.