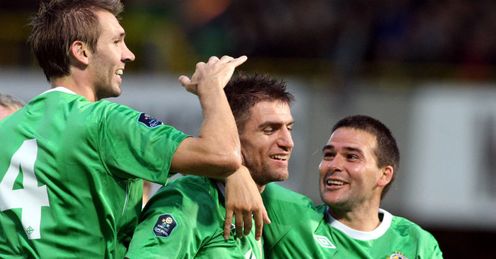 Aaron Hughes has revealed that he will retire from international football at the end of Northern Ireland’s Euro 2012 campaign.

The current Northern Ireland captain told BBC Radio Ulster’s Sportsound that he had been considering his international future for a while and that the decision would allow him to prolong his club career.

I had thought about doing it at the end of the last campaign. It would have been nice to go out on a high by qualifying to a major finals but it was not meant to be.

But it is good we have had realistic chances of qualifying in the last couple of campaigns. I knew halfway through this one that it was my last.

There are a few reasons why I would want to stay on, but there are more for me to say it is time to call it a day and concentrate on my club football. I feel now is a good time while I am fit and playing well.

Hughes, who made his international debut against Slovakia in March 1998, has captained his country on 46 occasions. He has 79 caps to his name, scoring a single goal, against the Faroe Islands in August. If all goes to plan, the Fulham centre back will line-up against Estonia at Windsor Park on November 8, before playing his final international in Italy four days later.

I know this was a difficult decision for Aaron, but it is one we have to respect. Obviously from my point of view and also Northern Ireland’s, it is a huge loss.

Aaron is a truly excellent professional and a real gentleman. It is always sad to lose a player of Aaron’s calibre – but Aaron Hughes is not only a great player, he is a also a great captain and person.