Jol: We’ll go on the attack 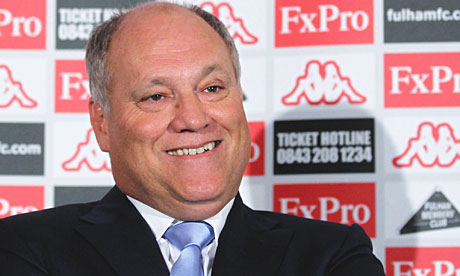 Martin Jol has spoken of Fulham’s attacking intentions ahead of their Europa League play-off round second leg against Dnipro tomorrow night.

Despite holding a 3-0 aggregate lead, the Fulham manager will send his side out with an attacking gameplan in search of the away goal that would secure their passage into the group stages of the competition. He is, however, well aware of Dnipro’s impressive record on home soil.

They’re a good team with a very good home record. Away from home it’s different for them. They will probably do everything they can to score an early goal. For us it’s very important to score on Thursday night.

When we’ve got the ball our intention will be to score. It’s important to be strong defensively and if you drop off like we did in the last 15 to 20 minutes of the first leg then you could end up with a problem, because they are very good at finding the spare man on the edge of the box or creating an overlap.

Jol confirmed that Bobby Zamora will miss the second leg having missed Sunday’s defeat at Wolves with an ankle injury. He believes that both Clint Dempsey, whose brace last week established Fulham’s strong position, and the returning Moussa Dembele could fill the void left by the England striker.

Bobby’s not available so we have to find a solution for that position. “Of course last week Clint scored two goals and it’s not all about Bobby. Of course he’s a good target man but we have to come up with another solution up front. Moussa Dembele came on against Wolves last weekend and did well so hopefully he can have a big say in the game.

Jol has played down talk of the European games being an unnecessary distraction this early in the season, insisting he wants to take his side as far as he can in the competition.

It doesn’t matter how difficult or easy it is. You have to play these games and that’s what we’ll do.

These games in Europe raise the profile of Fulham and it’s good for the Club, the fans and the players. It was probably the highlight of our history being in the Europa League final.