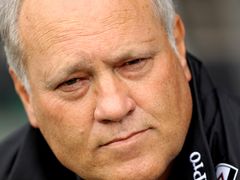 The Whites have failed to score a league goal this season and were largely anonymous in an attacking sense against Dnipro as they clung onto their aggregate lead to reach the Europa League group stages on Thursday night. Jol admits that the start of the season has not been ideal for his new said and concedes that his team need a result against Newcastle tomorrow.

We have to do better. We have to play to our strengths and of course we could say we have got a lot of defensive qualities.

The second half against Aston Villa and Wolves showed we are capable of scoring goals. But you have to do the business – score the goals and get the results. If you don’t do that, you play for a 0-0.

Thursday, of course, was over two games so we were okay but to lose a game away from home was not what he wanted. For the confidence of the team, it is always better if you score a couple of goals and win these games.

But we didn’t so it is still a worry but hopefully we can score against Newcastle because that is what we need. We need a result.

Jol has been linked with a number of strikers as he seeks to bolster his Fulham squad before the transfer deadline and, while he recognises the importance of adding to his forward line, the Dutchman is also looking to add players in other areas.

It is not only about strikers. Nine players left the club and there will probably be one or two [more] leaving the club.

I am not only after a striker, you know. We need players for the numbers as well because we could not field a second XI [on Thursday], for example, so you have to field your best players all the time.

That is not what you want and that is why we are trying to get players. We are very close [to making signings] but it is always the same, you know. If you want a good player there are always other clubs involved so you have to wait and see