Fulham weighing up move for Wilkshire 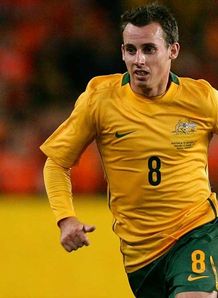 Fulham have been linked with a surprise move for Dynamo Moscow full-back Luke Wilkshire.

The Australian international defender spent three years at Middlesbrough, making 24 appearances for the club, and a further three years with Bristol City before his impressive performances at the 2006 World Cup earned him a trial with FC Twente. Despite being sent off on his debut, Wilkshire soon became a regular in the first team, helping them to qualify for the UEFA Cup and then the Champions’ League in successive seasons. He has won 60 caps for Australia, the latest coming earlier this month in their 2-1 win over Wales, scoring four goals.

Wilkshire made a £1.2m move to Dynamo Moscow in 2008 and has made 82 league appearances for the Russian side, scoring three goals. The 29 year-0ld is particularly versatile having spent most his time with Dynamo playing in central midfield. The Daily Mail reports that Martin Jol has made the signing of a new right back a priority – as well as bringing in back up for Bobby Zamora – and claims that have made enquiries as to Wilkshire’s availability. Other sources have suggested that Fulham are closing in on a deal to sign Aston Villa full-back Luke Young, who is also interesting QPR.