Dempsey: Great to be back amongst goals 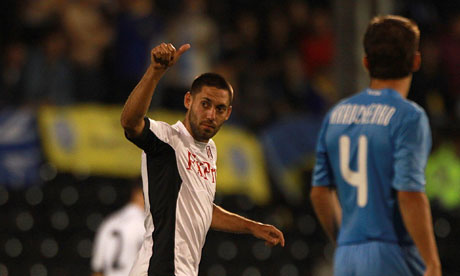 Clint Dempsey was delighted to return to goalscoring form for Fulham in their 3-0 win over Dnipro last night.

The American was Fulham’s top scorer during their last campaign but his involvement with the United States over the summer had limited his chances under his new manager Martin Jol. Dempsey scored twice for the Whites to give them a comfortable aggregate lead to take to Ukraine next week as he was played behind lone striker Bobby Zamora.

The first three games I didn’t have many shots and that was frustrating. I tried to come out tonight and make sure I took advantage of the chances that I did get and I’m happy I have two goals now.

For the first goal, I had a late run in, it was a great ball in from Siddy (Steve Sidwell).

I was thinking about taking it on my right foot but at the last minute decided to go with my left. I just had a better feeling with it.

I was able to redirect it and put it in. And then before the cross I was able to make a little room for myself and get the header. So I’m excited about that.

Obviously, a lot of credit to the people who were putting the balls into the box. But I was pleased to take advantage of the chances I did get tonight.

Dempsey also paid tribute to new signing Pajtim Kasami, who made Fulham’s third goal and had an impressive full debut.

He’s very skilful, he’s confident. He tries things and it’s about just finding that right balance to know what you can and can’t get away with. I think that his future looks bright and he put in a good performance tonight.

The Texan also said that there was no discussion of proving a point for Jol against the man who succeeded him at Tottenham, Juande Ramos.

[Their history] was not something that played on our minds. It was about coming out here and winning the game.

We knew that we needed to get some goals here at home because it’s going to be a difficult away leg. We were able to do that.

Getting three goals is great but the most important thing is that we’re able to keep a clean sheet even though at times it maybe looked a little bit scary in the second half. They had some good chances.

We try to play the right way. We have a lot of honest guys on the team that work hard and we have a good core group of guys that have been here through the most successful period in Fulham’s history.

We’ve had a lot of managers change in a short amount of time. But we stick together and every time a manager comes in we all try to get on the same page and do the best that we can.

We are excited about the new manager that we have and everybody wants to impress. These games are important early on, you want to gain his confidence and show him that you want to be out there and play as many games as possible. That’s what it’s all about.