Swansea pull out of Stockdale race 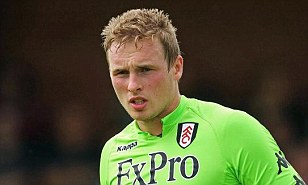 Brendan Rodgers has confirmed that Swansea have ended their interest in signing David Stockdale.

The Premier League new boys reportedly had a £2.5m bid for the Fulham goalkeeper rejected and a loan move was scuppered by Fulham’s desire to be able to recall Stockdale at 24 hours’ notice, a clause which isn’t available in loans between top flight clubs.

David Stockdale was one that we were monitoring closely, but he wasn’t the only one. David will probably go into the Championship on loan. So that won’t happen, purely because of the recall thing.

I had a good conversation with Martin Jol and we would have liked him to come here because his development would have gone on but they have got to think tactically about whether they would need him back.

He will go elsewhere. An offer has gone in for Lee Camp as everyone knows and it’s between the two clubs now.

Stockdale is expected to sign a new contract with Fulham and move on loan to a Championship club today. Ipswich are thought to be favourites to land the 25 year-old, but his hometown club Leeds are also in the running.