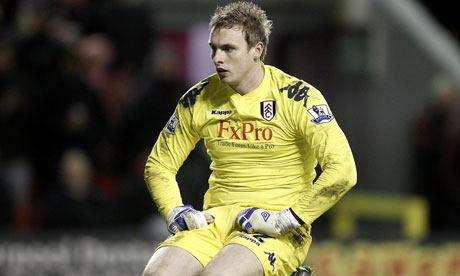 David Stockdale has told Sky Sports that he is happy to go out on loan to play regular first-team football.

I think (Jol) might stay with Mark, which is understandable, so it might be a chance for me to go out on loan. They’ve signed a new goalkeeper, so hopefully that paves the way for a loan move. I want to play games.

It’s not about being part of the Premier League and sitting on the bench. It’s nice, don’t get me wrong, but I want to be playing games. If there isn’t a Premier League option I might have to go down the league.

The chairman’s passed the word that he doesn’t want to sell me. I just have to get on with it. I like it here. I’ve been here three years now. I’ve had to prove myself time and time again. I’ve just got to keep working hard.

Definitely. What a club to go to. They’ve just come up. It would suit me down to the ground.

Whether Fulham would allow Stockdale to move on loan to a Premier League side remains to be seen. I’m still of the opinion that allowing him to leave – even on loan – is a mistake, but we are likely to see where he ends up as soon as next week.