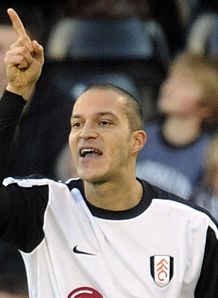 The People are splashing on Harry Redknapp’s search for a striker. The Spurs manager is apparently keen to lure Bobby Zamora back to White Hart Lane. You can see why given that Bobby is probably one of the best English forwards in the top flight at the moment, but the idea of a part-exchange deal for Peter Crouch isn’t likely to tempt Mohamed Al Fayed into selling.

Crouch has interested Fulham previously and the club recently challenged Sir Dave Richards over his conduct during the move that saw Crouch leave Portsmouth for Spurs a couple of summers ago. The Whites believed they were favourites to land Crouch having offered more up front than Tottenham but the former QPR striker opted to move to north London. Crouch has struggled for first-team football recently and has even been usurped by Zamora in the England reckoning. Fulham boss Martin Jol is known to be looking for another striker to add to his squad, but probably wouldn’t countenance losing Zamora, who has been the focal point of the Fulham attack since he joined from West Ham in a £6.3m deal with John Pantsil in July 2008.

Zamora has scored 32 goals in 111 appearances for Fulham and has shown signs of rekindling the impressive partnership with Andy Johnson during Jol’s brief tenure at the Cottage this summer. He endured a frustrating spell at Tottenham earlier in his career and Fulham are almost certain to rebuff any Tottenham interest in his services.