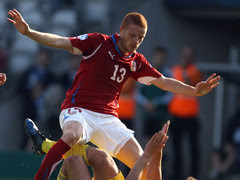 Martin Jol has been telling the Fulham Chronicle about his plans for new signing Marcel Gecov.

Although he’s not a natural fit as a replacement for Danny Murphy, Jol reckons that the 23 year-old Czech midfielder could grow into the Fulham captain’s role in time.

He would say he’s a box to box player – as they say in this country – but he can play centre midfield like Danny Murphy as well and he’s quite versatile.

He played in the European U21 Championships and was one of their best players. Against England he had a good game. He had two assists.

I know him now for a year and a few other clubs were after him but he wanted to come to us and that was important.

Jol could give Gecov his debut in Fulham’s Europa League qualifier at RNK Split tomorrow night.