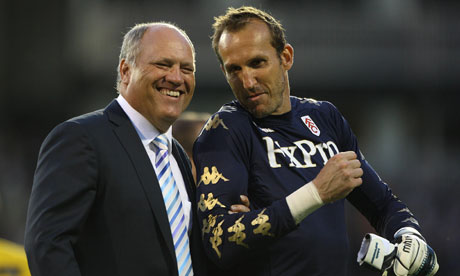 Manager Martin Jol was disappointed that Fulham failed to beat a dogged NSI Runavik side in their Europa League second leg tie this evening.

The Fulham manager praised the Faroese part-timers, who held on for a famous 0-0 draw, but felt his side should have been more ruthless in front of goal.

As a football man it’s nice to come to somewhere you haven’t been before. It’s part of the profession and it’s the same for the players. It’s not easy playing here but I feel if you create six or seven chances in the first half you should score.

In the first half we had seven or eight good chances and we have to be more productive and eager to score. In the second half I think we only had two chances which weren’t enough.

We have to get fitter and more creative and come up with solutions. In this sort of game you need players that can make a difference and we didn’t have that today.

Defensively we were sound and we didn’t concede which is important but they did have one chance at the end. Technically you can see the difference between the players but they did well today.

The pitch wasn’t as bad as we thought it would be. It wasn’t the best but over here they don’t have the same condition we have in England.

Jol also confirmed that a deal was in place for John Arne Riise, saying:

He’s coming for a medical. If that’s okay we’ve got ourselves a very good player.