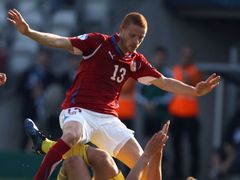 Marcel Gecov is aiming to make a name for himself in the Premier League after sealing what he calls a ‘dream’ move to Fulham.

The Czech midfielder, who starred in his country’s run to the European under-21 Championship semi-finals this summer, has signed a two-year contract at Craven Cottage. He has been giving his reaction to his £700,000 transfer from Slovan Liberec to Czech website isport:

Now that the contract is signed I feel great. It’s the Premier League, which has always been a dream destination for me.

I never had the courage to say it because I didn’t want it to sound too daring. Now it’s a reality, though, and it’s fantastic.

I only know Fulham

from television and will learn everything thoroughly when I’m there. Within two weeks I should be settled in there.

Naturally, I know where I’m going. I have been following the Premier League and can imagine what it’s going to be like. I can’t wait to experience it.

Gecov also dismissed any concerns about the length of his Fulham contract.

I’m not worried about that. If I’m playing well, then I will get a new contract.

We (Gecov and his agent, Jiri Muller) discussed it and decided it was only worth moving to a club where the manager wanted me, not just the scouts or the board, so we waited for Mr Jol’s view. When he said he would wanted me in his squad there was no problem anymore.

The 23 year-old’s agent revealed that Fulham had beaten off competition from NEC Nijmegen, Sparta Prague, Espanyol and Stuttgart to sign the highly-rated midfielder. Martin Jol has told a post-match press conference tonight that Gecov will be available for next week’s third qualifying round tie against RNK Split.