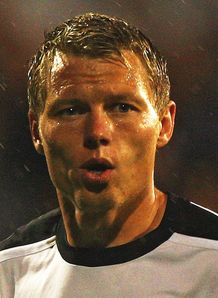 Bjorn Helge Riise could be out of action for as long as a month after injuring his hamstring in Split last night despite not getting on the pitch.

The Norwegian midfielder was an unused substitute for Fulham’s disappointing goalless draw against RNK Split in the Europa League third qualifying round but collapsed when going through his warmdown with the other substitutes after the final whistle. The exact nature of Riise’s hamstring injury has not been disclosed by Fulham, but the 28 year-old has struggled with similar niggles in the past, missing a number of games when he was on loan at Sheffield United last season with hamstring problems.

Martin Jol had been hoping to call upon Clint Dempsey for the second leg next week and may have to bring Simon Davies, who was named in Fulham’s squad for last night’s game but didn’t make the final eighteen, earlier than he had envisaged. Belgian forward Moussa Dembele, who has yet to play for his new manager Martin Jol owing to a knee problem, is back in training and could make the starting line-up.