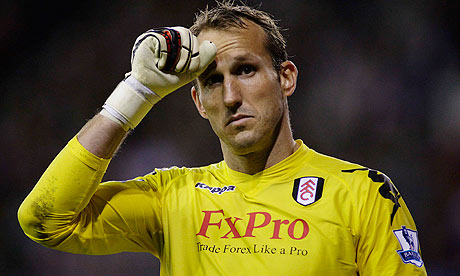 Mark Schwarzer is delighted that Fulham have moved quickly to replace Mark Hughes with Martin Jol.

The Australian international goalkeeper described Jol’s move to Craven Cottage as ‘a big coup’ for Fulham and is optimistic that the club can build on their recent success. Schwarzer said it was important to avoid the hiatus that followed Roy Hodgson’s departure last summer and is looking forward to Jol’s technical style of coaching.

I think the club was very conscious of the position we were in last season when two weeks before the first game we still didn’t have a new manager. It was well documented last season they were after Martin Jol and this time they’ve got him. It’s definitely a positive move to have it all sorted out now. Our pre-season starts on June 23 because we’re in the Europa League, so it was vital that we moved quickly on a manager and now he can start planning for the season ahead.

He’s a very well-respected and successful manager. His last job was at Ajax Amsterdam, prior to that he was at Hamburg and before that he was at Tottenham. They’re some very big clubs he’s been involved in. The Dutch are renowned for their coaching ability and I’ve been coached by a few Dutch over the years and they’re all technically very strong. I’m looking forward to working with him.

It might be only two-three positions up the table but that’s a huge ask to get into the top six. Look at the calibre of teams who just scraped in – Tottenham and Liverpool – plus those who want to get there, like Aston Villa, and others, and you realise how hard it is.