Pantsil steps into the dark 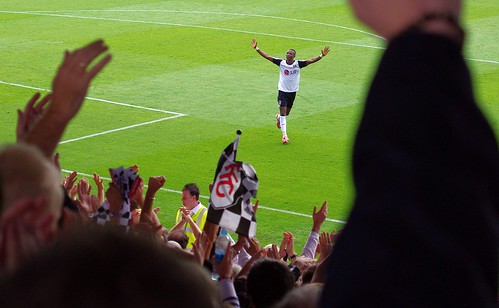 John Pantsil doesn’t know where he’ll be playing next season.

I am a free agent, I have some contacts and will see what I will do in the future. I know I will be playing my football next season at a good club. I am 29 years old so let’s see.

Despite the disappointment of recent months, he’s lost none of that infectious enthusiasm. Pantsil’s Fulham career was a straight one. Bought as back up for Fredrik Stoor, he quickly usurped the Swede and established himself as our first choice right-back. It wasn’t all plain sailing. He took plenty of brickbats for his early performances (mostly notably at Hull) but we took the bewildering combination of confidence, trickery and eccentricity in our stride.

People look back now and say that Pantsil’s post-match laps of appreciation blinded the fans to his faults. Similar arguments were made against Sylvain Legwinski in the twilight of the Frenchman’s Fulham career. It’s a little harsh, though, both on Pantsil and our supporters. Nobody would pick him as the peerless defender. He read the game well but took outrageous risks on occasions as well: nipping in to nick the ball, trying to dribble past opponents and playing too much football in our own third. Positionally, he could certainly be suspect too, but often relied on his athleticism to quickly right a wrong.

He was a far better option than Stoor, who always seemed a little lethargic to me, and might even now be considered to offer more than Chris Baird going forward. But there was no doubt that Pantsil benefited greatly from Roy Hodgson’s system. The wide midfielders – on the right it was often Simon Davies – were asked to track back and cover for the full-backs, affording Pantsil the kind of cover against tricky wingers that masked his defensive fallibilities. Once the shackles were thrown off under Mark Hughes, Pantsil was faced with much more ground to cover and a lot more defending to do. We all know the result.

A good friend of mine once described Pantsil as ‘so mad, he’s not off his rocker, he’s launched into the teams’. Fulham have always had personalities rather than players. He was colourful and charismatic, but you felt a heart-in-your-mouth moment wasn’t far away. But let’s finish by remembering the integral part he played in Fulham’s seventh place finish under Hodgson. For that, he’ll always be in our hearts. Let’s hope he flourishes somewhere else.