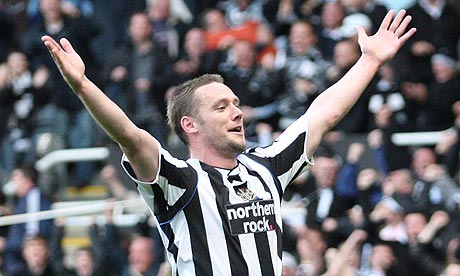 The Daily Star splashes on Kevin Nolan, who seems to be leaving St. James’ Park this summer, and links the Newcastle captain with a move to Fulham or West Ham.

Given the comparative strength of our midfield as it stands, this one seems like a strange signing but Nolan’s qualities are obvious. He’s a goalscorer from midfield and a good passer who isn’t afraid to stick his foot in. A replacement for Danny Murphy is clearly required at some stage, although this isn’t the one that jumps out initially. Nolan is dismayed by Newcastle’s reluctance to enter into serious contract negotiations and the Star seem fairly confident that Jol is keen to make a move for the former Bolton midfielder. The paper reports that the new Fulham boss has sounded out Chris Hughton, who managed Nolan at Newcastle, and received a glowing report.

West Ham are also keen to tempt Nolan into helping them out of the Championship, something he did with Newcastle two years ago, by reuniting him with former manager Sam Allardyce. The Hammers failed with a £3m bid last week but are reportedly ready to return with a player-plus-cash offer, possibly utilising Carlton Cole as a make-weight.