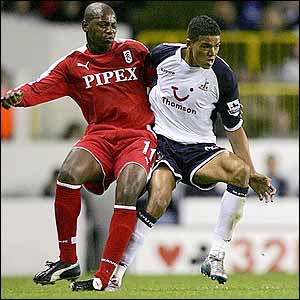 Martin Jol is mulling over a move for Tottenham midfielder Jermaine Jenas.

The England international is one of a host of players that Spurs will consider allowing to be move should their valuation, believed to be around £8m, be matched. Mark Hughes was reportedly interested in signing Jenas before he left Craven Cottage and Jol, who brought the midfielder to Tottenham in 2005, is also keen on completing a deal. Dave Kidd believes the interest centres around adding some dynamism to the Fulham midfield, with veteran Danny Murphy currently pulling the strings and no real creative hub waiting in the wings to replace him. Kidd also appears confident that Mohamed Al Fayed would sign off on such a big-money deal.

It doesn’t look as if Robbie Keane will be following his Spurs team-mate to west London, with his £70,000 a week wages a big stumbling block. Keane would have to take a drastic cut to fit into Fulham’s wage structure, while Jol has warned Spurs off Moussa Dembele. A move for DJ Campbell, available for £1.2m, could provide the Whites with some attacking depth.