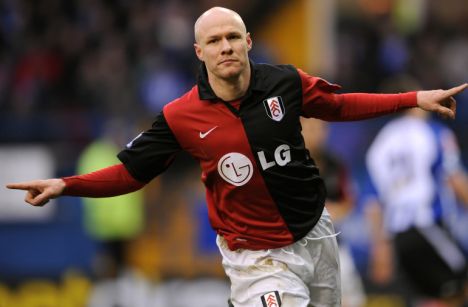 Even if Mark Hughes’ future is up in the air, the transfer tittle-tattle still continues.

I heard a whisper last night from a usually well-informed source yesterday that Fulham were playing hardball with newly-promoted QPR over Andy Johnson and wondered how long it would take to make it into the papers. Turns out less than 24 hours. The Daily Mail has the story – with Fulham rebuffing Rangers’ initial advances and saying they’ll accept offers of £4m for the former England striker.

Neil Warnock is known to want to strengthen his strikeforce to equip QPR for the top flight and fancies Johnson, who finished the season strongly with Fulham having battled back from shoulder and knee injuries. A deal may also be contingent on Fulham signing additional replacement strikers as the Whites badly struggled for goals without Johnson and Bobby Zamora last season. West Brom are also keen on reuniting Johnson with the man who brought him to Craven Cottage, Roy Hodgson. The Mail reckons QPR would find it difficult to match Johnson’s high wages – but I worry if we should even be contemplating letting such a hard-working striker leave.