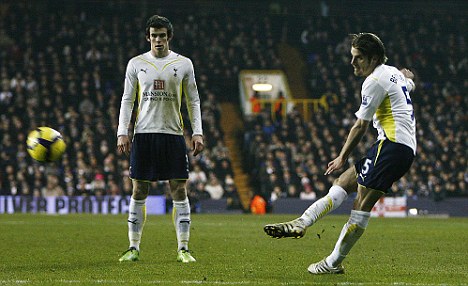 Staying with the Spurs connection and Fulham are considering taking David Bentley on loan from Tottenham.

The 27-year-old winger has no future at White Hart Lane, having been loaned out to Birmingham for the second half of last season. Blues’ relegation ended any chance of him making a permanent move to St. Andrews’ and Harry Redknapp is keen to trim both the size of his squad and Tottenham’s wage bill to make way for new signings this summer.

Fulham have been consistently linked with a loan move for Bentley after Mark Hughes took over from Roy Hodgson last summer. Hughes, who managed Bentley during his Blackburn days, narrowly failed to get his man at the end of the August transfer window last year before Bentley picked Birmingham as his destination in the new year, and new boss Martin Jol seems keen to revive a deal. Given the winger’s previous altercations with management and the law, how he flattered to deceive with Birmingham and the fact that Fulham are well-equipped in the wide areas, this strikes me as one to avoid.