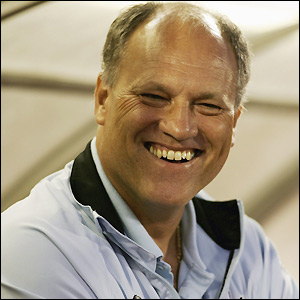 The Telegraph reckons that Fulham are likely to appoint Martin Jol and has an interesting line on the friendly relations between the club and Aston Villa.

The paper says that due to the close relationship between Mohamed Al Fayed and Randy Lerner – as well as the friendship between chief executive Alistair Mackintosh and his Villa counterpart Paul Faulkner – the clubs are set avoid a tussle for their preferred candidate. Whilst Jol is the favourite for the Fulham job, Villa are apparently ready to move for Steve McClaren.

Fulham’s shortlist also included the former Villa manager Martin O’Neill, who has led the betting since Mark Hughes resigned abruptly last week. But the Telegraph report that the Whites don’t have the resources to snare O’Neill, a line that probably refers to transfer budgets and wage structure. Jol, who has been offered a big salary, is believed to be keen on a return to London, where he still has a house. Claudio Ranieri, who has applied for the job, has apparently been discounted.