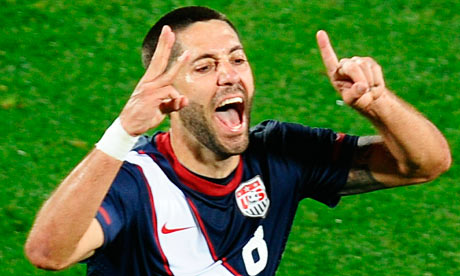 More build up to tonight’s Gold Cup final. It’s difficult for Brits to truly appreciate the extent of the rivalry between the United States and Mexico, so Fulham’s Clint Dempsey tries to put it into perspective:

I don’t think you can get tired of playing against Mexico. The rivalry is great for soccer.

Dempsey has a particular feel for the rivalry having grown up on the Mexican border and worked as an amabassador for a Mexican beer company.

I grew up near Mexico and learned from a lot of Mexican players, so I definitely have respect and history with Mexico. In terms of my loyalty, Modelo Especial is a quality beer that’s popular here in the United States and in Mexico, and I’m happy to work with the brand.

Mexicans and Mexican Americans are extremely passionate about soccer … but I think it’s difficult to estimate what my fan base is in Mexico. I’m sure some may appreciate my style of play but have allegiance to their own country’s players. As for the marketing future of American players, I think that it’s pretty limitless. A lot of us on the national team play in countries all over the world, so I think we have the ability to interact with not only Americans but can appeal to other markets too given the right fit.

Dempsey’s also been talking about the task of playing the final at the Rose Bowl. It’s one of the peculiarities of this rivalry that the majority of a sell-out 90,000 crowd will be supporting the Mexicans.

We have fewer fans than any other team. We need more. But we’re a strong team. I hope one day we’ll get more US fans in the stadiums. For now, we’re concentrating on winning.