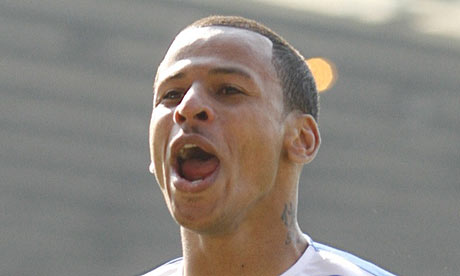 Fulham are set to seal a £1.25m move for Blackpool striker DJ Campbell.

The 29 year-old would be a surprise first signing for Martin Jol and is seen as back-up for Bobby Zamora. Campbell, who scored thirteen goals in 31 appearances as Ian Holloway’s side battled bravely against relegation from the Premier League last season, is believed to have rejected an approach from Sunderland in order to return to his native London.

He has had a meteoric rise from non-league football to the top flight, having only tasted league football for the first time six years ago. He shot to prominence with an explosive first goalscoring season with Chesham in 2000, when he scored 16 goals in 29 appearances. That was enough to earn him a move to Stevenage, for whom he struggled to gain regular first-team football, and Campbell’s next big break came with Yeading. He scored 83 goals in 109 appearances, earning two promotions, and making a name for himself by starring in their FA Cup run of 2005, which saw them beaten by Newcastle in the third round.

Campbell had a brief spell at Brentford, scoring nine goals in 23 appearances, before joining Birmingham City in January 2006 on the back of an impressive goalscoring run in league and Cup for the Bees. He didn’t fire in the Premier League as the Blues were relegated, but scored twelve times in their promotion-winning campaign of 2006-07. He made a £1.6m switch to Leicester, who were relegated, and was loaned to Blackpool, Derby and Blackpool before returning to the Seasiders in a permanent switch last August.

Should the deal go ahead, it will be interesting to see how Campbell fits in at Craven Cottage. With Moussa Dembele and Bobby Zamora likely to be the first-choice strike partnership, he will have his hands full to gain regular football – even if Jol opts not to sign another forward. A move for the likes of Mounir El Hamdaoui has been widely rumoured, whilst Jol is reportedly interested in signing Robbie Keane. The £1.25m release clause might have prompted him to take a punt, but whether Campbell can reprise last season’s form remains to be seen.