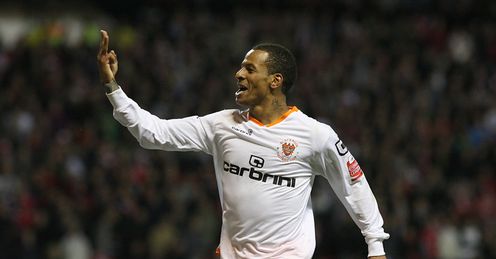 Today’s People and other news sources are reporting that Fulham are leading the chase for Blackpool striker DJ Campbell, who could be available for around £1.2m.

Campbell, who was born in Hammersmith, is apparently keen on returning to his west London roots having already played for Yeading and Brentford as well as Stevenage. The 29 year-old striker scored 13 goals last season as Blackpool went down on the final day of the season, but a move to Fulham would still be a surprise for me.

There’s no doubt that Mark Hughes will be in the market for at least one striker – with back-up for Bobby Zamora a priority – but he may be setting his sights a little higher than Campbell. His final choice may depend on the size of the transfer kitty he’s handed by Mohammed Al Fayed as proven Premier League strikers will cost big bucks.

Given that Dave Kidd has penned the story and, as a Fulham fan, he has good club sources, there might be something in this. Newly-promoted QPR are also keen on Campbell – so this is another one to keep an eye on.