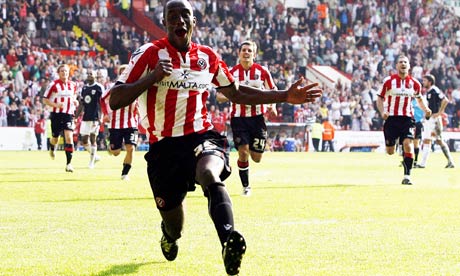 Fulham have had a substantial offer turned down for Sheffield United’s young striker Jordan Slew.

Slew, a graduate of the Blades youth team that was so impressive in reaching the FA Youth Cup final, swiftly established himself as a fans’ favourite by making an immediate impact after breaking into the first team as United were relegated from the Championship this season. Slew scored twice in six appearances towards the end of this season and was a key figure in the youth side that were beaten in the two-legged Cup final by Manchester United.

Sky Sports News were reporting Fulham’s interest in the England under-19 international this morning and it is thought that the Premier League side will return with an increased offer.