Welp, folks, it’s been a while.

Whether it’s because my head’s been buried in textbooks, or I just simply wasn’t able to catch the first few matches until replay, I’ve been out of the loop.

Now back to business.

The first 10 games of the season, roughly a quarter of the Premier League campaign, have passed, and we are sitting in a solid 10th, with 12 points to show for.

With all the injuries we’ve endured (Zamora, Duff, Dembele for a bit, Murphy for a bit, Etuhu, etc), I’d say we’re doing alright.

Mark Hughes hasn’t really done anything surprising tactically. Just about every side he’s put out has been of the 4-4-2 variety, usually a 4-4-1-1-ish looking side. And really, injuries considered, it’s amazing he’s put out such a consistent formation weak in and out.

The key loss tactically was Zamora. His hold up play can’t be replaced by anyone in the side, so we’ve had to mix and match a bit. We’ve had rough patches (West Bromwich comes to mind) and sweet spots (Saturday’s trouncing of Wigan is still fresh in my mind), but our style of play has been very interesting.

I’ll end with a final formation for Villa on Saturday. 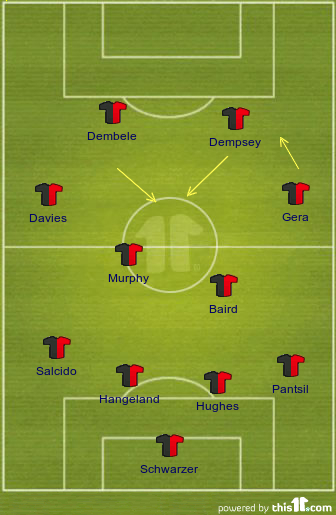 You could see Davies on the right to help out with the threat of Ashley Young, but I wouldn’t make the change, personally. I think Baird will stay at right back and Greening in the midfield, but I’d lean toward Pantsil. Villa are a talented side and will be a tough outfit, but if Murphy can dictate the tempo of the game and Gera, Demebele, and Dempsey can continue to link up, I think we’ll pull out the full three points.

On some personal news, I hope to be getting a video blog started on some of these games, barring I get my software working properly and find some time between classes. Until next time.