Some tactical notes from the 1-1 draw vs. Villa. 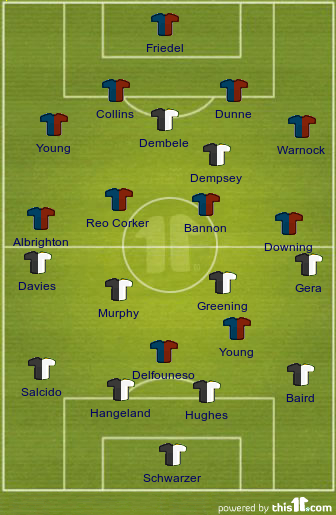 Starting lineups, with both teams in 4-4-1-1 set ups. This set the stage for a tactical battle of defensive schemes, which would not come into full effect until the entry of Cieran Clark.

Dickson Etuhu was back in the squad but didn’t feature. Hopefully this is more a question of his health and not of who should be in, because while Greening has filled in well, he’s not the player Etuhu is.
Other than that, no surprises. It was essentially 4-4-1-1 against 4-4-1-1, and this actually made for quite the tactical battle in regards to those players in the hole. More on that in a bit.

The game got off to a pretty eventful start, with Brad Friedel denying several Fulham opportunities. Both teams canceled each other out for the first half hour.

However, once Reo Corker went off, Villa were willing to concede possession to us, particularly in wide areas, keeping their wide midfielders narrow in defense and daring our fullbacks to get forward and create. Their plan was to defend compactly in the back, as they have all season, pressure through their young, quick midfield, and hit on the counter or quick ball.

That’s exactly how they scored, with Barry Bannon lofting a brilliant ball over the top to Mark Albrighton, who took an equally brilliant first touch past Salcido and slotted home nicely with the left.

This wasn’t the first mistake by Salcido, who had some trouble with the defensive scheme Fulham implemented in dealing with Ashley Young, as did the rest of the Fulham back four.

Villa were content to keep their back four rigid and use their central midfield, usually converted defender Cieran Clark, to mark the deep dropping of Dempsey. Fulham, on the other hand, used their centerbacks to mark Young’s runs, in order to keep our central midfielders higher up the pitch and spraying around passes.

The result was that Fulham had more of the ball (57 percent possession on the night) but Villa created more chances when in possession. Had Villa been more solid finishing, Fulham may have dropped all three points, as Young’s presence opened up tons of space and created several chances.

A couple plays come to mind. Check my video analysis below (forgive the shoddy quality, I used some pretty crude software).

We were lucky not to get burned on these two plays, and there are a few more like them. Because we were lacking a true box-to-box presence, our centerbacks had to mark the drops of Young, and it pulled us out of position every single time. The addition of Etuhu should fix some of this.

As Villa simply wouldn’t let the ball through the middle, and coupled with the absence of a true ball winner up top, Fulham were forced to either play into their hands and move wide, play over the top, or force the action down the middle.

We tried the first option and failed. With Salcido off his game, Baird not much of a roaming fullback, and both going off with injuries, it was going to be a tough night scoring for Fulham regardless, but our fullbacks provided no attacking width, and neither Gera nor Davies is great going wide.

We tried the second option and again failed. Richard Dunne dominated our forwards in the air, winning header after header. None of Dempsey, Dembele, or Johnson are ball-winners. Boy, do we miss Bobby. 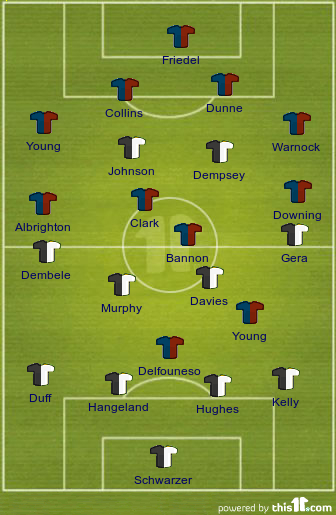 Fulham's look after Hughes' adjustment. It was effective, as we began to dominate the ball and create more chances. Perhaps Davies should get more runs centrally.

Hughes saw this, decided to go route three, and made the right call tactically, moving Davies to the middle and putting Johnson on for Greening. Many expected Dickson Etuhu to come on, but that wouldn’t have changed the way Fulham were playing, which was the needed call.

After that, Fulham were able to mount some attacks down the center, which could have given us an earlier equalizer if not for some poor finishing and good defending from Villa.

The equalizer was similar to the goal that put us down, as it was a long diagonal ball. Ours, however, was a free kick, and Hangeland met it strongly to get his second late equalizer and yet another draw.

Positives: The link up play of Gera, Davies, and Dempsey. With Dempsey acting as a pivot between the two wings, the three connected often and created some great opportunities.

Negatives: Lack of quality in final third and lack of inventiveness from fullbacks. Zamora is sorely missed, as is the finishing form of Gera. Salcido had his worst night for Fulham, and Baird didn’t offer much either. Again Hughes turns to Kelly and not Pantsil. It’s a shame to sit that much talent, but it looks as if he’s in Hughes’ doghouse for good.

Looking forward: Duff is back healthy, which gives us another option wide. I think he’ll get the nod over Dembele, who has been all of mediocre since returning from his own injury. His pace is off, and he’s too predictable, always cutting back to his left. Etuhu also needs to step in centrally, and if Salcido’s ankle is bad, I’d like to see Baird on the left and Panstil on the right, although Kelly and Baird are a more likely option.