Something at the Fulham-Wolves game really sprang to my attention. In contrast to the disciplined 4-4-2 or 4-4-1-1/4-2-3-1 that the team played under Hodgson, there was a fair deal of variety in the way the team lined up on Saturday. Watching the team’s set up during goal-kicks is always a fairly good indicator (if not a perfect one) of the formation in which they are being set up by their manager.

The flexibility really derived from the versatility of the three D’s – Davies, Dembele and Dempsey.

The game kicked off with a fairly basic 4-4-2, with Davies and Dembele on the wings, and Dempsey just off Bobby Zamora.

However, there was a variation that I hadn’t seen a recent Fulham side use. Having seen the way Manchester City played under Mark Hughes (and continue to do so now), it certainly appears that this slight change has his mark all over it.

Whilst the back four remained the same way as it was, the midfield turned into a three. Murphy dropped slightly deeper as the pivot. Whilst Etuhu remained alongside him (although in a slightly more advanced position), Simon Davies moved inside and did the same. Now, Fulham had three central midfielders.

Bobby Zamora remained the sole man up front, but now had two men supporting him on either side – Dembele just off his to his left, Dempsey to the right. Perhaps surprisingly, however, they were not stationed out wide, but in rather central positions, trying to get into the gap between the Wolves defence and midfield.

The arguments for this slight change seem to be that Hughes wanted more bodies in the middle of the pitch. It came at a time when Fulham were being hacked to pieces, and rather losing out in the midfield battle. Hughes wanted to make up more competitive in the midfield, and play two of our most creative/threatening players in areas where they could do the most damage if they received the ball. Dembele has already spoken of how he feels he is developing “an understanding” with Dempsey – if this can work in advanced positions just off Zamora, it could be very dangerous. Play the ball up to Zamora, and he immediately has the trickery Dempsey and Dembele supporting him. 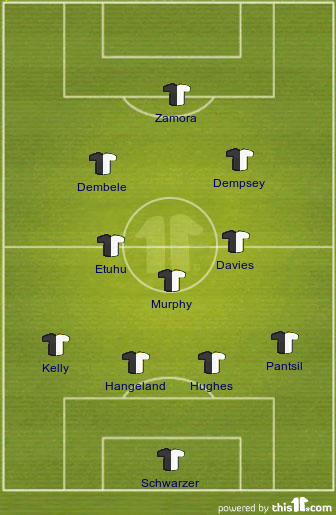 However, a repercussion of this change was that the full-backs suddenly had more on their plate. As well as having to offer width themselves, they now had to deal with the opposing wingers with less help than they had previously. Whilst Kelly dealt well with the pacey Jarvis, Pantsil was clearly struggling, and this did little to help his performance.

Pantsil’s confidence levels are clearly low this season. Perhaps he’s struggling now that Hodgson is no longer at the club. Maybe the talk that Hughes was looking to replace him and ship him off to West Brom has affected him. Or he’s still shattered after the World Cup. Either way, he’s looked poor this season, and this slight change in formation did little to help him.

The 4-3-2-1 was short-lived. Zamora went off injured soon after, and one full-back was struggling and lucky to stay on the pitch. Seeing the game through to half-time became essential, so Fulham reverted to the hard-to-break-down 4-4-1-1 that Hodgson instilled.

In the second half, the full-backs were instrumental in our improved performance. Kelly charged forwards and offered an outlet on the left hand side – not in the same league as Konchesky, but with Davies cutting inside, it provided some vital width after a narrow first half, and led to the equaliser.

Baird’s introduction was always a key factor. Not only was he less error-prone than Pantsil (although Jarvis left him for dead at one stage), but his distribution was terrific, finding Gera, Murphy and Dembele with regularity. In addition, he provided an option on the overlap as Gera drove inwards with the ball.

Finally the addition of Eddie Johnson towards the end was a decent move. Dembele, Dempsey, Gera and (to an extent) Davies all like to play in similar positions. All, essentially, are attacking midfielders – none are out-and-out forwards. Johnson’s introduction meant that the side now had someone up top at all time, and injected some pace to the side at the expense of the tricky but rather sluggish Dempsey. Dempsey was being targeted by the Wolves players (he was the most fouled player on the pitch), and his control was not at the levels he would perhaps set himself.

Johnson’s introduction meant that the side had a pacey option up top, and a strong player who would work the channels. Whilst the Wolves centre-halfs were robust, neither had a good deal of pace – amply demonstrated by Berra’s body check when Johnson played the ball past him, and his immediate dismissal. In addition, it meant that Dembele could work just behind a front-man, rather than be the most advanced player on the pitch. Now, the side had someone whose role was to be “the” forward man, rather than one who likes to drop off into space and clutter the midfield further.

As a result of Zamora’s injury, adding to those of Andy Johnson and Diomansy Kamara, Eddie will find himself with quite a role to play for the rest of the season.