When I mentioned the other day that I was far more excited by the prospect of Port Vale coming to Craven Cottage than Manchester United, I got a few blank looks from my mates. They couldn’t understand how anybody could get excited about a run-of-the-mill League Cup tie, but then they simply didn’t get it. If I wanted to surround myself constantly with the glitz and glamour of Premier League football, my TV would be attuned to Sky Sports News 24/7 and I’ve probably have  a season ticket at one of the Big Four/Five/Six/Seven.

Port Vale at home doesn’t seem like a particularly appetising tie to the casual observer. They won’t be too many national press reporters at Craven Cottage tomorrow night. But, more’s the pity. Reason number one for my great excitement arrives in the form of Port Vale’s manager. It might be a bit of a stretch to suggest Micky Adams is one of Fulham’s greatest ever managers, but he’s certainly very fondly remembered by the Fulham faithful. You see he’s the one who started the upward climb, before Mohamed Al-Fayed’s millions rolled into town. 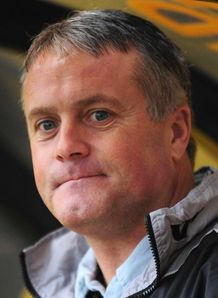 Adams, who had spent three years as a player at Fulham and specialised in getting the Whites out of dodgy situations (remember Ashford away?), took over what could almost be described as a broken team in a desperate bid to starve off relegation. With no money and no managerial experience to fall back on, he instilled a belief in a side that had slumped to second-from-bottom and had recently lost to the only side below them, Torquay. Adams wanted none of the credit for guiding Fulham to safety, telling reporters and fans alike to ‘judge me on next season’.

Working on the sort of wafer-thin budgets that Fulham managers were used to in the pre-Al-Fayed era, Adams fashioned that was fiesty, but capable of playing attractive football. Glenn Cockerill, Danny Cullip and Mark Walton came in on free transfers, whilst the talented full-back Paul Watson and gutsy Richard Carpenter were the only players who cost anything at all. Most importantly, Adams had a word with Scottish striker Mike Conroy, who went from a surly, enigmatic centre forward to a master goal-poacher, almost overnight.

The transformation was remarkable. From scrapping at the wrong end of the table, Fulham were never out of the top three all season and strung together a club record set of away wins. They embarassed higher-division opponents in both Cup competitions and eventually missed the Division Three title by a single point. It was one of the most exhilirating seasons at Fulham for many a year and the sight of an upwardly mobile west London club might have enticed Mohamed Al-Fayed to take a look at Craven Cottage. Adams’ reward, harshly sacked a few games into the following season because he wasn’t a big name, was far from just.

Having left Fulham, Adams became something of a red addair for lower-league clubs. He guided Brighton, for whom he signed Bobby Zamora, to the Division Three title and built the side that won the Division Two championship in the following season and took Leicester back to the Premiership at the first time of asking. Adams was a late applicant for the Vale job in 2009 and courted headlines after telling journalists that he’d transfer list the whole squad after three defeats in seven days. Having narrowly missed out on the play-offs last year, Port Vale currently sit in fourth place after three games with seven points and reached the third round with an impressive victory at Queen’s Park Rangers. For all the reminiscing the visitors, with their front line of namesakes Marc and Justin Richards, will be a tough proposition.

It will be something of an old boys’ reunion at the Cottage as Geoff Horsfield is now coaching alongside Adams at Vale. Fulham fans won’t need any introduction to Horsfield who scored 31 goals in 78 appearances for the Whites between October 1998 and May 2000. His whole-hearted performances made him a fans’ favourite shortly after a surprise more from Halifax and his immediate impact as Fulham romped to the Second Division title – Horsfield scored 15 league goals in 28 appearances – showed he could make the step up. Horsfield also starred in the Cup competitions, as Fulham reached the quarter finals of the League Cup in 1999-2000, memorably turning Sol Campbell to score the third in a famous win over the holders, Tottenham Hotspur. His recent successful battle against testicular cancer showed he’d lost none of that fighting spirit.

Given Mark Hughes’ record – he won the League Cup as a player and guided Blackburn to the semi-finals, something he also achieved before being shown the door at Manchester City – you’d hope he would take the competition a little more seriously than his predecessors. He’s already indicated that tomorrow might be an opportunity for a few of the fringe players to show what they can do, though Fulham would be well advised not to take Port Vale lightly. Perhaps Moussa Dembele, who delivered an impressive cameo against United, will seize his chance to shine.