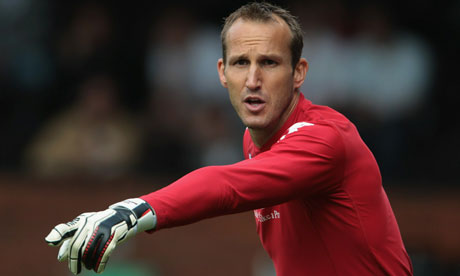 Mark Hughes has insisted once again that he remains unmoved over Mark Schwarzer’s future.

The Fulham goalkeeper has publicly spoken of his desire to join Arsenal, who had a bid rejected for the veteran Australian international in May, but Hughes insisted that Schwarzer would remain at Craven Cottage unless an offer was tabled that satisfied his club. Speaking to BBC Radio Five Live, Hughes said:

He [Schwarzer] sees an opportunity, and possibly wishes to take that if he can. But he understands the situation, and our position in the Premier League. If there isn’t a deal or a situation that all parties are happy with, at the moment we can’t sanction Mark Schwarzer leaving Fulham Football Club.

Pressed on the subject in the post-match press conference, Hughes again stated that he wanted to hold onto Schwarzer.

That is the intention, yes. Nothing has moved on.

Myself and Mark have had conversations and I fully understand the reasoning behind the fact that he maybe wants to take up the opportunity (to join Arsenal). But I think he also understands that we have to protect our position as well, and that is what we are doing.

We are not going to put Fulham’s position or reputation at risk by making promises we can’t fulfil, so at the moment it’s very much the status quo and nothing has moved on.

Hughes was also coy about the prospects of bringing Craig Bellamy to Fulham.

I said on Friday if there is an opportunity to bring him to the club, we will investigate that, but I’m aware that there are other clubs interested. Obviously we would like to do some things in terms of bringing him to the club, but there is a long way to go and the key to it is what Craig wants to do.

I think it is really important that he takes the right step for him. I’m sure he will take his time and eventually come to the right decision.

Asked by Five Live about whether he would be interested in signing Shay Given – as reported in some of the papers this morning – Hughes hinted that he wasn’t thinking about losing any goalkeepers at the moment.

From our point of view, we’re in a position with exceptional goalkeepers. Obviously, we want that situation to remain. If there’s something that can be done where all parties are happy then we’ll investigate it. But, at the moment it doesn’t seem likely.