Hughes out of Northern Ireland friendly 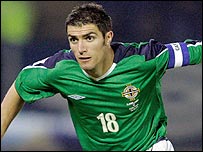 Northern Ireland will be without their captain Aaron Hughes for Wednesday’s friendly against Montenegro after the centre back was sent back to Fulham with an ‘inflamed Achilles tendon’.

Nigel Worthington might have a few problems at centre back after Gareth Macauley also pulled out of the squad having picked up a back strain in Ipswich’s win over Middlesbrough. The trip to Podgorica is seen as vital preparation for the forthcoming Euro 2012 qualifying campaign that pits the green and white army against Serbia, Slovenia, Estonia and Faroe Islands.

Fulham are still hopeful that Hughes, who played the whole of yesterday’s friendly win over Werder Bremen, will be fit for their Premier League opener at Bolton Wanderers next weekend.