The 2010-11 campaign Fulham Football Club will be a fascinating mixture of strange and familiar.

Newly-hired manager Mark Hughes arrives to Craven Cottage with big shoes to fill. Roy Hodgson left Fulham as one of its most popular managers ever, capping off his stay in London with a trip to the Europa League final.

But many of the old faces remain. The big performers of the 2009-10 side—Aaron Hughes, Zoltan Gera, Clint Dempsey, Bobby Zamora, among others—are all back. In fact, of squad members who made at least 15 appearances last season, only Chris Smalling and Erik Nevland have left the club.

Mark Hughes' biggest task will be keeping an aging squad fresh for Premier League Competition. Tactics will be key in doing so.

Thus, Hughes’ job is made easier by the fact that he is inheriting an experienced and comfortable squad. This year’s side will be familiar with one another, so chemistry should not be a problem.

Hughes’ top priority, then, will be managing the tactical aspects of the squad. His biggest challenges will be finding depth in a side that lacks a true big-name star and utilizing versatile players in their most effective spots.

As the transfer window has yet to close, this piece may require edits as players come or go. For now, we’ll work with the players available and leave speculation for another day.

Barring injury or transfer, Fulham are set to have one of the strongest defensive units in the Premier League.

Despite much talk of moving to bigger clubs, Brede Hangeland returns for another campaign for the Whites. His size will again match nicely with the speed of Aaron Hughes for the classic stopper-sweeper pairing in central defence, and new signing Phillipe Senderos should provide much-needed depth in the centre.

At full-back, John Pantsil and Paul Konchesky provide skill and service going forward, but both are disciplined, steady defenders. Pantsil missed much of the season last year due to injury, but he was superb at the World Cup this summer, grading out among the best according to the Castrol Index.

Chris Baird, the Cottagers’ consummate utility player, may get starts across the back four due to his versatility and could see minutes in the midfield as well. Stephen Kelley could see an expanded role with Smalling gone, but he’ll have an uphill battle behind the likes of those already mentioned.

Mark Schwarzer has turned down Arsenal and other suitors to return between the pipes. His experience and skill should keep backups David Stockdale and Pascal Zuberbuhler fairly inactive for the season.

While Mark Hughes’ teams are known for a physical style of defence (his Blackburn teams were consistently atop the league in fouls), this defense relies more on finesse and positioning, with vice-captain Aaron Hughes as the face of the Fulham back line. Don’t expect the strategy to change much, but some physicality will be injected with new leadership, and a relief from European duty should allow the Cottagers to improve on last season’s respectable tally of 46 goals conceded (the 8th best total in the Premier League).

Aaron Hughes is the unsung hero in the Fulham back line, and the vice-captain's leadership will be vital to success for the Whites.

Of all the areas in the squad, the defence should see the most improvement, if due to nothing more than increased rest and added depth and experience. It should also be the most consistent area, with Hughes, Hangeland, Konchesky, and Pantsil getting the most minutes and Baird or Senderos providing depth in key spots.

If the defence is to be the most consistently fielded area of the squad, the midfield should see the most turnover game-to-game. There are no spots locked up in the midfield, save one, with the right wing being the most tightly-contested slot.

Captain Danny Murphy should be the one guarantee in the midfield. The experienced central midfielder drives the Fulham attack and anchors the defence from the middle. He should see less time than his 41 appearances of a year ago, which should bode well for his 33-year-old legs.

Damien Duff on a wing is the next-closest to a lock in the side. Hodgson was fond of allowing the left-footed Duff to play on either side of the midfield, and Hughes may do more of the same. On the left, Duff provides great service and cleverness to get down the byline, while on the right he’s always a threat to cut inside and rip one from long distance.

Jonathan Greening and Dickson Etuhu should battle for the central spot beside Murphy. Both are effective counters to Murphy, providing bulk and defensive range to match nicely with Murphy’s passing finesse. Etuhu is the favorite to start early on, but Hughes would do well to look for a transfer target that can both start beside Murphy and also begin the process of replacing the aging captain.

The biggest battle will be for the wide midfield spot opposite Duff. Clint Dempsey, Simon Davies, and Zoltan Gera will be fighting for a place in the starting lineup for much of the early part of the season. All could see time there, with Dempsey likeliest to earn the most starts.

With that said, I imagine there will be a place for two of the above each and every game. That will depend on the formation Hughes implements, but more on that later.

With news of an England call-up fresh off the presses, Bobby Zamora enters the 2010-11 campaign off of one of the finest years of his career.

In a season so successful that he nearly emerged as a member of Fabio Capello’s World Cup side, Zamora scored 19 goals in all contests, including 11 en route to the Europa League final.

But it’s not just his prowess in front of net that makes Zamora so valuable to the Whites. He led the club in assists during the Premier League campaign last year, and his passing sets up just as many scores as his running and shot-taking.

Beyond him, however, there are no guarantees leading the line. Andy Johnson is still battling chronic knee injuries with no foreseeable return date. David Elm will be back, but his scoring record is less than stellar. Gone are Nevland and Stefano Okaka, who saw the next most minutes up top. Eddie Johnson returns from loan to Aris, where he played well, but Johnson has been as dependable as London weather since his arrival to the Cottage.

So with such little depth up top and a bit of depth in the midfield, how should Mark Hughes set out his side?

With only one forward a proven threat in the league (barring any significant pick up in the transfer market), Hughes’ best bet is to set out in a lone forward formation.

Zamora is the prototypical target forward: He’s excellent with his back to goal, he can drop into the midfield to distribute, and he has an unbeatable work rate.

If lone forward is the decision, then, that leaves some decision-making concerning the midfield. As previously noted, a lack of depth in the central midfield makes 4-5-1 an unlikely decision. 4-2-3-1 requires a tandem of tough, tackling holders, true wingers, and a play-making trequartista-like player in the final third—again, not exactly the type of personnel Mark Hughes is blessed with.

The chemistry between Zamora, left, and Gera should make for a potent Fulham attack in the final third

The most comfortable option, based on performance last year and simple personnel common sense, is 4-4-1-1. This works well with the depth and versatility in wide midfield positions and the lack of depth in the centre of midfield. The back four and midfield four play in their natural shapes, with the fullbacks free to roam forward, the wide midfielders space to cut in or push wide, and the central midfielders playing on a string.

Gera, Davies, and Dempsey can all excel wide or just behind the striker, with Gera in particular relishing in a role just off Zamora’s shoulder. The Hungarian international scored 10 goals in all competitions, including six in the Europa League, where he and Zamora were often paired in a similar fashion. It was this position that allowed Gera to be named the club’s 2009-10 Player of the Year.

With Gera more forward, Dempsey and Davies can battle it out for the other wide position, and hopefully Bjørn Helge Riise can push for time out wide, as well.

Unquestionably, Hughes needs to get on the transfer market and bring in some talent, most pertinently in the central midfield and forward positions. Depth and age are going to be issues for this team, and the easiest fix can be found on the market. However, in a 4-4-1-1, much like the one pictured below, Fulham can put out a starting XI that can compete for top-six standing in the Premier League. 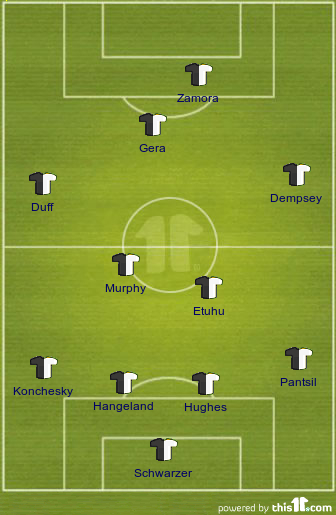