How Hodgson did it

When Roy Hodgson took over at Fulham, it was seen by many as something of a left-field appointment. The grey-haired tactician, something of a throwback to a bygone era, might have had an impressive CV and accumulated trophies across Europe and plaudits in the international arena but English journalists remembered how he failed to spend Sir Jack Walker’s millions at Blackburn. They felt there was little hope of Hodgson saving Fulham from relegation – and how wrong they were.

Nobody anticipated what happened next. A summer of rebuilding followed by a sventh placed finish was extraodinary and Hodgson’s next miracle was to take Fulham from a side just happy to be in Europe to the final of the first Europa League. Their dramatic shift of priorities, from a side delighted to reach the group stages, to one that placed progress in the knockout rounds ahead of their remaining league fixtures, was a testament to Hodgson’s navigation past supposedly superior opponents and a cloud of volcanic ash.

Nobody thought when Fulham kicked off their European campaign in early July in the sleepy summer sunshine of Vilnius that the Whites would still be going 62 games later in Hamburg as the city prepared to host a major final. The evolution of Fulham’s ambition is evident in Hodgson’s team selections. Fulham fielded a shadow side for their first fixture in the group stage, an ardurous trip to Sofia, prioritising an away game at Wolves that followed three days later (which they lost), but by the time Juventus where swept aside at the Cottage in a never-to-be-forgotten comeback, Hodgson’s eyes were firmly fixed on the prize. 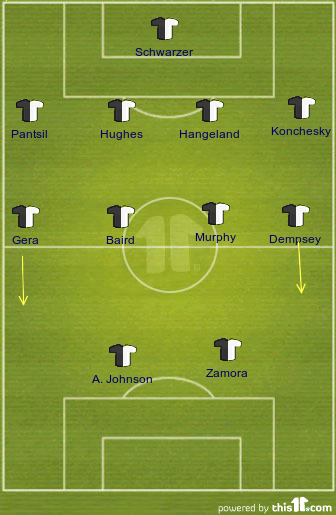 How Fulham lined up against Vetra in July

The alterations in tactics have had much to do with Fulham’s unexpected run to the final. Hodgson started the campaign with the conventional 4-4-2 that had brought such success domestically last season. In an impressive home victory over Amkar Perm in early August, Bobby Zamora and Andy Johnson looked to be striking up the sort of rapport that Hodgson envisaged when he paired them together the previous pre-season after Brian McBride’s departure. Both looked lively and potent in front of goal, until Johnson’s evening was ended by a crude challenge by an uncompromising Russian centre back. Such was the damage that the former Crystal Palace forward’s season never really got going after that.

Diomansy Kamara had a fleeting run in the first-team after that but Hodgson hit on a winning formula almost by accident. Zamora, still shot-shy and perhaps shaken by a lack of goals in his first season at the Cottage, revelled in the chance to become the focal point of the Fulham attack when asked to lead the line on his own. This showcased both his endless work ethic and his ability to unsettle defenders both in the air by also with his fine first touch and vision. Hungarian Zoltan Gera seemed a different player when installed just behind Zamora in the ‘hole’ rather than out wide – and both have contributed heavily to Fulham’s success. 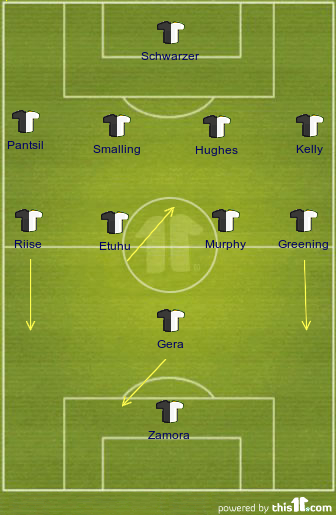 Hodgson’s side have only failed to score twice away from home – once in a rearguard action in Russia against Perm and then in the semi-final first leg in Hamburg. It’s quite an achievement for a side whose domestic travel sickness is well documented.

The run to final has also been built on the back of a miserly defence. John Pantsil has returned at right back in recent weeks, but the performances of the likes of Chris Baird – who also had an excellent spell as a makeshift central midfielder – Stephen Kelly and Chris Smalling served to underline the fact that Fulham’s fringe players have not let anybody down. Fulham’s defensive organisation memorably frustrated a gifted Shakhtar Donetsk side in their first knockout assignment while they brushed aside Wolfsburg without too much bother as well.

The spine of Fulham’s side is full of European experience. Mark Schwarzer went all the way to the final of the UEFA Cup a few years back with Middlesbrough, Aaron Hughes reached a semi-final with Newcastle and Brede Hangeland has plenty of continental games under his belt. Captain Danny Murphy has won the UEFA Cup with Liverpool whilst Damien Duff has plenty of fond memories to call upon and the likes of Dickson Etuhu and Clint Dempsey have relished playing at this level.