Fulham in talks with Senturk? 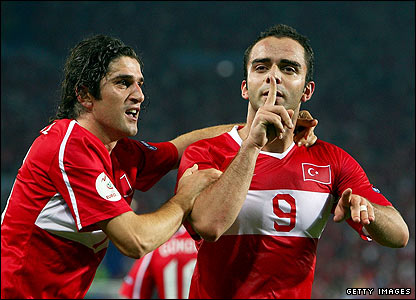 The News of the World has picked up on the rumours circling the continental press during the week that Fenerbache striker Semih Senturk could be moving to Fulham come the summer.

The Turkish international has eighteen months left on his contract, even if the NOTW were suggesting he might move on a Bosman, but each paper seems to agree that Roy Hodgson’s in the market for a new centre forward with Erik Nevland heading home at the end of the season.

Senturk burst to prominence on the international stage at Euro 2008 having had two fine seasons with Fenerbache. Often used as a late substitute, he scored Turkey’s equaliser against Switzerland and then forced a penalty shoot-out in the quarter-final against Croatia with the last kick of extra-time. Senturk converted his spot-kick as the Turks won 3-1 on penalties and then threatened to repeat the dose against Germany in the semi-final, with another late equaliser, before Phillip Lahm scored an injury-time winner.