Perth players to warm up for World Cup at Fulham 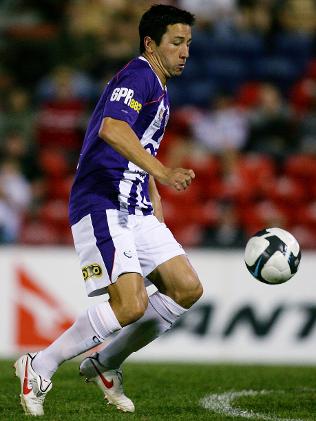 Perth Glory’s Mile Sterjovski and Jacob Burns will train with Fulham as they to give themselves the best possible chance of making the Australian squad for this summer’s World Cup.

The pair will spend five weeks alongside their international colleague Mark Schwarzer at Motspur Park. Burns, once of Leeds United, said that it was vital to train at a high-level during the A-League off-season and said he was immensely grateful to the Fulham manager Roy Hodgson for the opportunity.

We had Pim’s (Verbeek, the Australian coach’s) blessing to go to a top European club and keep training and that was a good thing to do. There may be a certain few that are walk-in starters but for the majority of the group it’s going to be a battle till the end.

I feel as though we’ve (he and Sterjovski) had a decent season behind us and (Verbeek) knows that it’s a dream and we’ll be doing everything we can to be there. With injuries, with form, with managers not playing players everyone’s in with a chance.

We’re forever in his (Hodgson’s) debt for having us there. Training at a level of football such as Fulham could be as good, if not better, than some of the other leagues in the world playing games.

You can look at it this way – there’s a whole lot of (Australian) players in Europe that aren’t playing. I think it’s impossible to think that Verbeek’s going to have 23 players playing week-in, week-out leading into the World Cup.