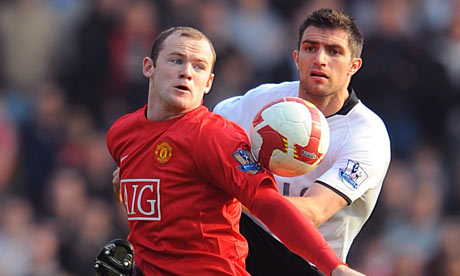 Eye on the ball: Aaron Hughes

Move on and quickly. That’s the name of the game, according to Aaron Hughes. He’s already looking ahead to Fulham’s Europa League quarter final against Wolfsburg at Craven Cottage on Thursday night.

Obviously we were disappointed to have lost the game against Hull. But what is done is done; we have to move on, as we have done this season. You have to move on quickly whether you win or lose, because there is always another game around the corner.

In his report from Hull, Jamie described Hughes as ‘hugely underrated’. That might even be an understatement so important has the Northern Ireland captain been to our renaissance under Roy Hodgson. But Hughes is as modest as they come so he’s not taking his return to the side as a foregone conclusion – even though it would be a massive surprise should he not replace Chris Smalling at centre back.

Hopefully I’ll be back on Thursday night. I’ll be keeping my fingers crossed, and of course, I don’t want to be left out. That said, I understand the Manager’s reasons for making changes because we have played a lot of games this season. But this is a game that we all want to be involved in – it’s another massive night for the Club.

Hughes says Fulham have been swotting up on Wolfsburg since the draw was made and began to put their plans into action this week.

We know a fair bit about the opposition, and started our preparation this week. We’ve been having a look and them, and few things that we could possibly do. By Thursday we’ll know pretty much all there is to know about them, and we’ll address that accordingly.

You get to this stage and you do start to think that anything can happen. Obviously it gets tougher the further you go, but we haven’t got this far through luck – we’re here on merit. We deserve our place in the Quarter-Final and we’ve made a lot of progress in this competition. It will be tough, but there is no reason why we can’t go further.

He knows, like most of us, that German sides are as tough as they come, though.

I’ve played against German opposition before in both the UEFA Champions League and UEFA Cup. They will be a tough team, and will come to Craven Cottage with their own intentions of progressing I’m sure. At this stage of the competition, it doesn’t really matter where your opponents are from; you know that they are going to be strong. They wouldn’t have reached the Quarter-Final if they weren’t a good side.