Juventus on Thursday. Still can’t really get my head around that.

La Vecchia Signora has seen better days than this by the sounds of it. Expectations are always high for a team that’s won the Serie A title 27 times – even if there’s still a stench after calciopoli – and poor old Ciro Ferrara couldn’t stand the heat. Brought in as a temporary replacement for Claudio Ranieri at the end of last season, Ferrera oversaw a truly disastrous start to this campaign which saw Juve crash out of the Champions’ League, the Coppa Italia and slumped to the relatively troubling position of sixth in the table.

Alberto Zaccheroni has since stepped in and steadied the ship. Sunday’s 2-1 win over Fiorentina took Juventus back into the Champions’ League places and had Alessandro Del Pierro purring about the prospect of winning the Europa League. Diego scored an early goal and hopes to break his ‘home’ duck even if the game won’t be played at Juve’s traditional home.

Zaccheroni, who says he’s fully focused on Fulham, hasn’t escaped criticism, though, or more accurately fire. Their previous performance against Palermo was so bad that their fans decided some arson was in order. It’s not as if that burning desire was unique: seats were set alight against Milan in January, when Juve were beaten 3-0. How might they react if Bobby belts in another screamer?

As well as considering donning some productive clothing, Zaccheroni’s got a few injury problems to deal with. Buffon won’t feature leaving the shaky Alex Manninger, once of Arsenal, as the last line of defence. Fabio Cannavaro could be pressed into service in central defence despite only returning to training this week and Fabio Grosso must be the favourite to start at left back after his stunning strike in Florence.

Felipe Melo is missing through suspension, so it’s a bit of a guessing game as to how Juventus might play it in midfield. The clever Candreva energised a flagging side against the Viola at the weekend and playing him alongside Diego, the Brazilian who shot to prominence  – in Europe at least – with Werder Bremen, would certainly keep Etuhu and Greening occupied. 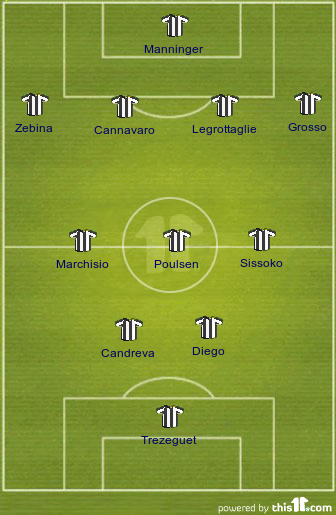 For all those of you fearing the worst in Turin, here are a few interesting stats:

Excited? I know I am.