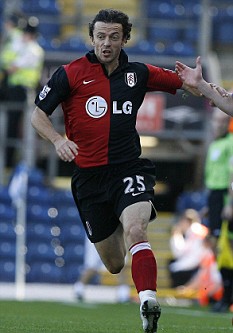 Welsh winger Simon Davies is looking forward to a massive fortnight at Fulham.

The Cottagers host his old club Tottenham tomorrow in an FA Cup quarter final and then face two mouthwatering Europa League ties against Juventus – and Davies admits that the transformation from just a couple of seasons ago is difficult to get his head around.

The FA Cup quarter-final on Saturday and then Juventus on Thursday – what a week for the club. Times have not been like this at Fulham for ages.

The reality check is that two years ago we were starring relegation to the Championship in the face. What was it 15 minutes or so from going down so what a turnaround, everyone is really excited.

The boys are on a high after Donesk – it was amazing. They are one of the best teams I have ever played against, a difficult venue, and they pass the ball around as good as anyone. Going through has given us a big lift but it leads us into such an exciting time for the club.

But Roy is keeping the boys’ feet on the ground. We know that we have two great opportunities in the cups but it is a normal week for us, normal training, focusing on each game.

We have a good record against them in recent years at the Cottage. We never give anyone an easy ride at home.

But we also have a game that can worry teams. When we get it right we are a very good footballing team. We have the players that can make them think.