There are so many things to talk about last night. Fulham’s rip-roaring start where we really went for the throat of the opposition, Shakhtar’s mesmorising passing and Bobby’s thunderbolt that rocketed in off the crossbar. What fascinated me was the tactical battle between the two sides.

Shakhtar adopted a formation that is rarely seen in these parts. The only thing you could recognise from an English point of view was a back four, although that was hardly a standard British back line. The full backs pulled out regularly to the touchline and the centre backs were ball players. In front of them were two central midfielders, but neither were anchors, stoppers or holding midfielders. To describe Fernandinho, who seemed to have the ball glued to his feet at times, as anything like that would be ridiculously insulting to his outrageous ability.

The South American rhythm of the side was evident from the fact that Mircea Lucescu’s team included an all-Brazilian front five. Ilsinho showed his quality with a remarkably perceptive searching pass to release the deadly Luiz Adriano, who seems a snip at just £2m, for the equaliser whilst we can expect a higher quality performance from Jadson in the second leg. At times, it seemed as though Shakhtar were passing through us at will, although on reflection that doesn’t really do justice to some diligent defensive work, including a couple of terrific saving tackles from Aaron Hughes.

Hodgson’s tactics were constrained by the ineligbility of Stefano Okaka and injuries to our other forwards. The flexibility of Fulham’s formation allowed Zoltan Gera to line up just behind Bobby Zamora and the Hungarian revelled in the space he found. The goal Fulham worked inside the opening minutes was a think of beauty. Bobby might have benefited from a missed interception from Kucher and Pyatov might have saved Gera’s shot, but it was a slick move worthy of Shakhtar. 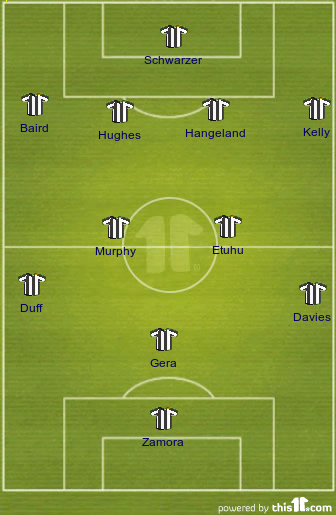 It’s clear that Gera benefits from playing in advance of a set midfield rather than wider in an orthodox midfield. He has greater scope to influence the game than when he is restricted to a particular flank and, when closer to a centre forward, the flicks and tricks he brings to the party have the potential to be much more effective (see Zamora’s stunning winner). Gera’s been much more influential in Europe playing in this role (see his goals against CSKA Sofia and FC Basel) and I’d be tempted to try him here with a little more regularity in the league.

It would be interesting to gauge Zamora’s thoughts on his role as a lone striker. The number of times he lifted his arm and gesticulated to Schwarzer or a defender to play the ball in his direction suggests he thrives on being the target man and the interplay between him, Gera, Duff and Simon Davies was excellent at times. The confidence is coarsing through Zamora’s veins and his finish was absolutely astonishing. There’s every chance Roy Hodgson will have to set a higher target than 20 goals before the season’s out at this rate.

The only thing that troubled me was the disappointing distribution of Dickson Etuhu. The Nigerian looks good against the likes of Portsmouth and Burnley – and would be particularly useful for some of the pitched battles we seem to fight away from home – but he seems frustratingly limited at this level. When he wasn’t nervously turning away from goal and sending the ball backwards, Etuhu placed an alarming high number of passes straight to the opposition. He might just be coming back from the Africa Cup of Nations but we’ll need a more disciplined performance from him in Donetsk next week.