Is this the end for Erik? 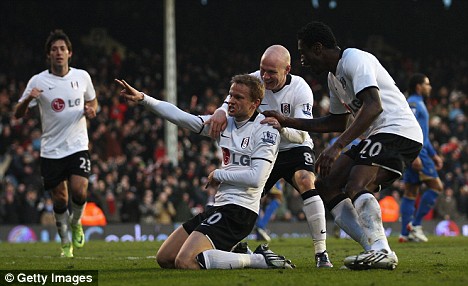 I’ll admit I’m reading between some debatable lines but it’s not the first time we’ve discussed Erik Nevland’s future. Should we sign Stefano Okaka on loan from AS Roma – as we were widely tipped to do – then Nevland’s chances of first team football at Fulham would recede even further.

The Norwegian’s been very understanding about his lack of first team action since Roy Hodgson bought Bobby Zamora and Andy Johnson to the club. The Fulham manager is clearly a fan of Nevland, largely for his ability to change/decide a game late on as a substitue, last seen in our 3-1 win over Liverpool. But he’s not getting any younger, struggles to make too much of an impact from the start, and would probably be behind Zamora, Johnson and the returning Kamara, who is expected to be back in contention in a couple of weeks.

Add Okaka, a young and speedy forward, into the mix and Nevland might soon struggle to get a place on the bench. It seems harsh but it’s difficult to see him staying along for the ride without getting any real shot at regular football. He’s already won a place in many a fan’s heart and probably remains the deadliest finisher at Fulham – it’s just a shame he isn’t 25.