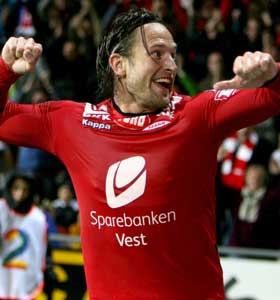 The Norwegian newspapers are reporting that Roy Hodgson is interested in signing striker Thorstein Helstad.

Hodgson has brought plenty of players from that part of Europe to Fulham and is known to be considering adding a striker to his squad this month so this one could have some foundation. The club have had scouts at some of the recent Le Mans matches so we could be looking at the tall target man, who has a healthy goalscoring record.

Helstad has a strong history of scoring goals in his native Norway, topping the goalscoring charts with Brann in 2001 and 2005. He won the Austrian league, Cup and League Cup at Austria Vienna and then returned to Brann, where he scored an astounding 35 goals in 48 games in the space of two years. That earned him a €2 move to Le Mans in 2008 where he has continued to find the net.

He has interested English sides in the past, including Everton a couple of years ago. Helstad has 10 goals from 37 caps for Norway and the only thing that might count against a move is that he’s now 32. Here’s some Youtube footage for you to digest: