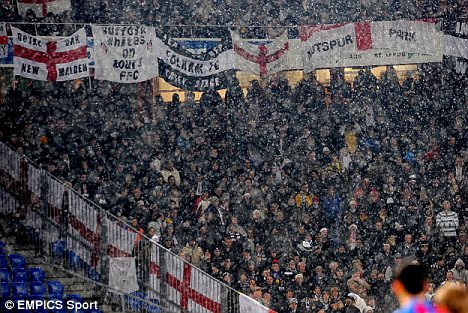 The travelling support in the snow

It was a magical night in Basel and the media have lapped it up.

Zamora then executed a fine piece of centre-forward play, chesting the ball down for Riise to surge down the right before arriving at the far post to head Fulham into a two-goal lead.

Andrew Dhillion, in The Sun, couldn’t resist pointlessly reopening the Zamora vs. the fans debate on the biggest night in Fulham’s history:

Yet his relationship with the Fulham Twitters remains chillier than the weather.

He barely acknowledged the cheeky chants of “Bobby For England” and rapturous applause from the 1,300 travelling fans when he was rewarded for an outstanding performance by being substituted 10 minutes from time.

Adam Marshall – for the News of the World website – salutes our spirit:

Fair play to Fulham. They have had rotten luck in the Europa League this term with some of the most ridiculous refereeing decisions hampering their progress at every turn.

And Roy Hodgson’s side could have been forgiven for thinking things just weren’t meant to be when Basel were thrown a lifeline in the 64th minute. Substitute Federico Almerares’s cross clearly hit Chris Smalling in the stomach but referee Stefan Johannesson awarded a penalty after a discussion with one of his assistants. It was another decision that was blatantly wrong but Alexander Frei converted the spot-kick`to make it 2-1 to the Cottagers.

Did Fulham falter against a side unbeaten at home in the competition? Not at all.

The Mirror focuses on brilliant Bobby:

Abominable snowman Bobby Zamora put the ZZ top in a blizzard here as Fulham made the Swiss roll over.

Two-goal Zamora was an awkward guest for Basel Faulty as Roy Hodgson’s men ploughed through a snowstorm into tomorrow’s draw for the Europa League knockout stage.

Needing a win to join Liverpool and Everton in the last 32, Fulham were a revelation – none more so than Zamora, whose purple patch has now yielded four goals in his last three games.

Basle struggled to cope with Zamora’s physical presence all evening, despite an initial lack of support — particularly from Jonathan Greening, who looked out of touch on the left wing — but Zamora scored his third goal in as many matches to give the Premier League side a vital lead.

The Express urges us to enjoy the adventure:

Fulham have at times appeared unhealthily preoccupied with domestic thoughts when they should have been enjoying this Europa Cup campaign, a little like holiday makers worried they may have left the gas on back home.

But having now secured their place in the last 32 while at the same time having accumulated more points in the Premier League than at the same stage last season, this could be the time for them to relax and perhaps even enjoy the view.

Tom Dart, of The Times, disputes the Sun’s assertion about Zamora’s lack of interest in the fans when he left the pitch:

The remarkable renaissance of Bobby Zamora continues, as does Fulham’s interest in the Europa League after a strange night in Switzerland that was at times deeply tense for the English side, at other times very comfortable.

Zamora, acting as a leading man yesterday rather than playing the role of sidekick to a predatory partner that seems to come more naturally to him, scored for the third successive match and his double in St Jakob-Park took him to nine for the season.

After finding the net against Sunderland this month and using his celebration to suggest that his critics “shut their mouths”, Zamora even gave the travelling fans a little wave when substituted late last night.