How much Christmas cheer will Fulham give us? 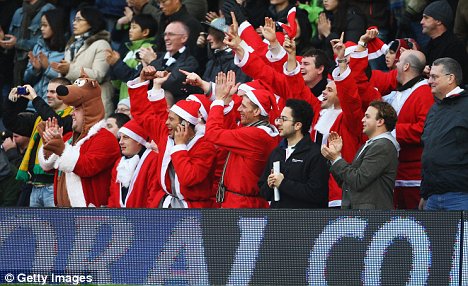 At first glance, it’s tempting to think that Scrooge himself drew up Fulham’s Christmas fixture list.

Looking at it over the weekend, I wondered aloud about where the points were going to come from. Next weekend, hot on the heels of a testing trip to Basel, we welcome the champions to Craven Cottage. Nothing do it – after all, we beat Manchester United at home last season, didn’t we? Yes, but that was our first home league win over the Red Devils since September 1964. Just to make it that bit tougher, Aston Villa went and worsened Fergie’s mood on Saturday night by winning at Old Trafford. United will be fired up and eager to return to winning ways come Saturday afternoon.

Spurs are the visitors to the Cottage on Boxing Day. We’ve got a decent Premier League home record against Tottenham but Harry Redknapp’s spent the ENIC millions pretty wisely. This is a different side to the one we easily brushed aside last season. Wolves will have strengthened their resolve to pick up three points too, by virtue of their surprise success at the Lane on Saturday.

The festive period is wrapped up with a trip to Stamford Bridge on December 28th. It’s been a long time since we won at the hotel in Fulham and, however enjoyable Petr Cech’s bloopers reel might have been at the weekend, you can rest assured that Carlo Ancelotti will have spent hours trying to cure Chelsea’s defensive woes by the time we pitch up. He’s just too good a manager to allow their title tilt to veer off course for too long.

The only positive is that we picked up points against all three of these sides last season, when – coincidentally – our Christmas record wasn’t too shabby. We went unbeaten over the festive period, when we played Tottenham and Chelsea. What we’d give for a repeat, eh?