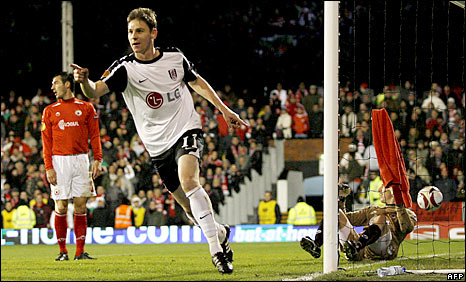 It was patchy, but it was just enough. Once again, Fulham made life difficult for themselves against the weakest side in their Europa League group. CSKA Sofia might have considered themselves somewhat unlucky not to have added to their single point – gained at Fulham’s expense in the opening round of matches – after spurning two glorious chances towards the end of an edgy evening at Craven Cottage. Roy Hodgson’s side kept their hopes of reaching the knockout stages alive, but their margin of victory should have been much greater than Zoltan Gera’s close-range header.

The Whites will now have to go and beat Basel in their final game after the Swiss side succumbed to a resurgent Roma at the Stadio Olimpico. Hodgson decided to rest Damien Duff and Clint Dempsey – both were brought on as second half substitutes – and gave young Chris Smalling the opportunity to enhance his burgeoning reputation at the heart of the Fulham defence. The home side settled quickly and might have got the early goal that could have heralded an avalanche.

Bobby Zamora burst into the box with intent but a heavy touch allowed the goalkeeper to spring off his line and gather, before Simon Davies burst down the left but struck a shot wide. Almost out of nowhere, the Bulgarians nearly took the lead. Todor Timonov had little option but to go for goal from 25 yards and it nearly came off as his effort beat Mark Schwarzer and thudded against the crossbar.

As if galvanised by that near miss, Fulham sprung into action up the other end of the field. Zamora played in Gera who was felled by Ivan Ivanov in the box and it was a cast-iron penalty. No yellow card was forthcoming from the Romanian referee but an even greater let-off was to follow. Danny Murphy, normally so consistent from 12 yards, skied his spot-kick over the bar and into the Putney End. Gasps and murmurs of conversation followed as the Fulham fans registered the returning skipper’s miss.

It seemed as though the home side might regret that failure as they continued to push forward but couldn’t find the finishing touch. Zamora sent a deflected effort wide and, the most unlikely of goal threats, John Pantsil saw a shot parried by Zdravko Chavdarov at his near post. It took a tactical switch to produce the opening goal. Bjorn Helge Riise, who had started on the left side of midfield, moved over to the right and the Norwegian had an almost immediate impact.

Riise skipped away from his man and into space on the flank, sending over a dangerous cross that Gera crouched to steer into the net with his head from six yards. It was the least Fulham merited for their strong start and fitting reward for a high-octane performance from the Hungarian, who looked to be revelling in playing in his natural position, as an advanced midfielder linking the quartet behind him to Zamora. A minute after the goal, another Gera header created an opening, only this time Zamora contrived to volley over the bar.

Fulham should have had a second to make the half time cups of tea go down a little easier but Riise drilled a shot straight at keeper from the edge of box before Simon Davies missed a great chance to double the lead. Zamora did brilliantly to flick the ball into his path with his head but the Welsh midfielder screwed his left-footed shot wide from the edge of the six yard box. CSKA were limited in response, their sporadic attacks only producing another long-range Timonov which flew wide.

Fulham served notice of their intentions to find a killer goal after the break. Gera and Zamora played a smart interchange of passes before the former West Ham striker mishit his shot high and wide as he lent back on his weaker right foot. The visitors were much more ambitious in the second period and began to attack with increasing frequency, using the ball far more sensibly. Todor Yanchev looked to be clean through on goal after CSKA broke quickly when Zamora lost possession but wanted too many touches and a combination of Schwarzer and Hughes scrambled the ball behind.

The longer it stayed at 1-0, the more confident the visitors became. Spas Delev might have done better with a left wing cross, but snatched at his shot and sent it wide. In a frenzied finale, it looked as though a repeat of the Roma heartache was on the cards. Kosta Yanev saw his long-range effort calmly cleared off the line by Duff and Yanchez wasted a late free header as the home side hung on.

The objective of keeping their destiny in their own hands had been achieved, but only just. They’ll have to improve in Basel on December 16 to progress.