Dempsey delivers a point for Fulham 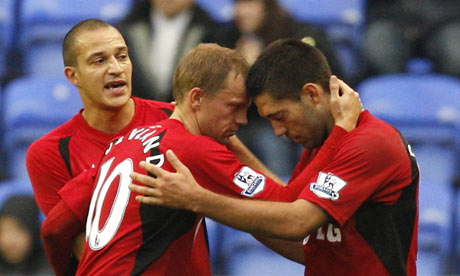 Clint Dempsey grabbed a point for Fulham as Roy Hodgson’s side bounced back from their midweek defeat in Rome with a battling performance at the DW Stadium this afternoon.

The Londoners were far from their fluent best for most of the contest and, as tiredness from their European exploits crept in, Wigan will probably feel that they had the better of the late chances to nick a victory. The creditable away point continues Fulham’s fine unbeaten league sequence and leaves them comfortably placed in mid-table ahead of the international break.

The league’s lowest crowd of the season so far were treated to a lively first period. Fulham, welcoming back Damien Duff from his Achilles injury, made the brighter start and could have gone in foront when Bobby Zamora cleverly floated a ball in behind the Wigan back line. Erik Nevland nearly found the perfect response to being sent off in Rome on Thursday night but the Norwegian guided his header onto the inside of the far post.

Moments later, Wigan took the lead. Fulham had themselves to blame for failing to properly clear an Erik Edman corner, needlessly conceded by John Pantsil, and when, the Swede’s cross was headed back into the danger area by Paul Scharner, Emmerson Boyce had enough time to take a touch before shooting past Mark Schwarzer. The lack of marking will have alarmed Hodgson, normally such a stickler for defensive solidity.

The goal galvanised Wigan. The impressive Charles N’Zogbia skipped away from a couple of tackles a couple of minutes later and would have doubled Wigan’s lead if it wasn’t for a fine save by Schwarzer. The Australian goalkeeper turned his dipping shot onto the crossbar and Fulham breathed a big sigh of relief. Hugo Rodallega was far from peripheral despite playing out wide rather than through the middle and one of his clever touches created an opening for Jason Scotland only for Schwarzer to save.

Fulham, denied the space they craved to play their passing game by the powerful Mohamed Diame in the Wigan midfield, clawed their way back level just before the break. With the home crowd still snarling the concession of what looked a soft free-kick, Clint Dempsey was felled by Titus Bramble and referee Phil Dowd pointed to the spot. Wigan’s complaints went unheeded and, in the absence of Danny Murphy, Andy Johnson or Diomansy Kamara, Dempsey himself stepped forward to beat Chris Kirkland from 12 yards. It was his third goal in three league games and the American’s third in four league starts against Wigan.

Fulham began the second period brightly and the home side had Kirkland to thank for preserving parity ten minutes after the break. The former England goalkeeper produced a splendid double save, first parrying Dempsey’s free-kick and flinging himself forward to keep up Jonathan Greening’s follow-up when the on-loan midfielder looked certain to put Fulham in front.

Both goalkeepers were kept busy and Schwarzer produced a brilliant save to deny Paul Scharner before Hendry Thomas found space at a set-piece only to head straight at the Fulham goalkeeper. Wigan’s probing passing game, which manager Roberto Martinez had displayed in two FA Cup ties against Fulham last season when he was in charge of a Swansea side that were unfortunate not to progress in the competition, kept Fulham on the back foot. The elusive N’Zogbia nearly lit up the second half with a mazy dribble and evaded a crude challenge by Chris Baird to run on into the Fulham box but his finish didn’t much the high standards set by that energetic burst.

Fulham did have chances too as the game drew to a close. After Damien Duff’s shot was blocked and Bobby Zamora miskicked, Dempsey drove wastefully over and then the Irish winger forced Kirkland into a good diving stop. From the corner, Brede Hangeland perhaps should have made more of a free header but the ball flashed wide of the Wigan goal.