Montella calls it a day 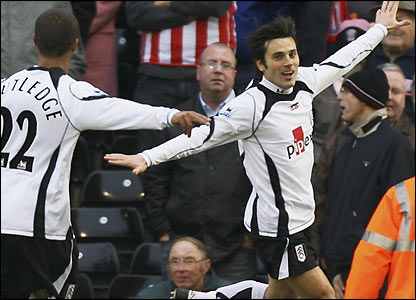 Legendary Italian striker Vincenzo Montella has decided to retire from football, according to a report in Il Corriere Dello Sport

Montella is contracted to Roma for another season, but will cease playing immediately. There has been no official announcement from the player or his club at the moment.

The man affectionately known as ‘The Little Aeroplane’ after his famous flying goalscoring celebration began a highly successful career at Empoli in 1992. He went on to play for Genoa, Sampdoria and Roma, but Fulham fans will remember with great fondness his loan spell at Craven Cottage in 2007.

Montella made his Fulham debut as a substitute in our Third Round FA Cup tie at Leicester, playing the last twenty minutes in an entertaining 2-2 draw. He replaced Heidar Helguson to make his league debut for the Whites at West Ham and played a pivotal part as the visitors fought back to secure a thrilling 3-3 draw..

The Italian made a memorable impact as a substitute in the Cup replay against Leicester, as he came off the bench at half-time with the Whites 2-1 down to the Championship side. He scored twice to level the tie at 3-3 and, with extra-time looming, a stunning solo winner from Wayne Routledge clinched Fulham’s place in the fourth round.

He made his first start for the Whites the following wekeend against Stoke and turned in a man-of-the-match performance. Montella scored one and made the other two goals as the home side stormed to a 3-0 win. Montella played in the defeat at Sheffield United that suggested everything wasn’t well in the Fulham garden and was involved as the side bounced back to beat Newcastle, before they went down to a narrow defeat at Bolton.

His Fulham career was soured by a sending off late in the 4-0 Cup defeat by Tottenham, which ruled him out of crucial games in the relegation run-in. Although Chris Coleman only used him as a substitute for the most part, Montella didn’t get much of a look-in under Coleman’s replacement Lawrie Sanchez. Despite scoring a crucial goal against Blackburn, Montella saw his loan deal terminated a week before it’s expiration.

Montella was delighted with the rapport he’d built up with the Fulham fans, telling the official website during his loan spell:

It’s magnificent because they were singing my name against Leicester before I’d scored my goals. The fans appear to have prepared their songs as soon as I arrived in London. Fortunately they haven’t had to wait too long to see the aeroplane celebration!

We wish Vincenzo all the best in his retirement.